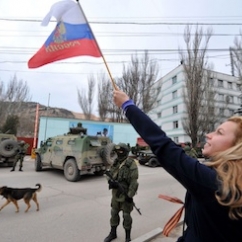 Merrick, NY—The stock market hates uncertainty. So it’s not surprising that U.S. stocks took a tumble Monday amid news of the Russian military takeover of the Crimean region of Ukraine. By Tuesday, stocks rallied as tensions in the region eased slightly, though the situation remains unresolved.

Gold, meanwhile, hit a four-month high on Monday ($1,355) but was lower Tuesday as short-term traders took profits and the market corrected. An announcement by Russian president Vladimir Putin that he has no plans to annex Crimea also eased demand for gold as a safe haven. At press time, gold was trading at $1,340.

But with one-third of the world’s diamonds coming from Russia, if the Western world imposes heavy-duty economic sanctions on Russia, it would without a doubt affect the diamond trade.

Diamonds aside, according to reports from top economists at Wells Fargo and Kitco, direct U.S. exposure to the Ukrainian and Russian economies is negligible but the European Union will be significantly affected if the crisis escalates, and that will have spillover here. Russia and Ukraine supply much of the EU’s energy, so if Russia turns off the tap, it will drive oil and gas prices through the roof and endanger Europe’s nascent recovery from recession. A domino effect could pull the U.S. back into recession, because although we don’t rely on Russia or Ukraine for oil and gas, a spike in their prices will definitely hamper consumer spending here.

But Jay Bryson, global economist for Wells Fargo, points out in a special report that cutting energy supply to the EU is not going to leave Russia unscathed either. EU energy exports account for about 10% of Russia’s fragile GDP, which registered only 1.2% growth last year. It’s not a decision to be taken lightly because it would pull Russia back into recession along with the rest of Europe.

Bjarne Schieldrop, chief commodity analyst with SEB Commodity Research, told Kitco he doesn’t think the Ukraine situation is over, and there may be more safe-haven investment buying, which would drive up gold. In fact, he expressed some surprise that safe-haven demand dropped so quickly.

“It’s too early to relax at the moment, in my view,” he told Kitco, and wonders whether Putin still might not want to eventually gain parts of Ukraine for Russia later.

Gold prices are likely to remain in the range of $1,100 to slightly under $1,300 for the foreseeable future, predicts Andy Waldock, founder of Sandusky, Ohio-based Commodity and Derivative Advisors. His longer-term view on gold is less driven by the Ukraine crisis than by the Fed. New chairman Janet Yellen is considered dovish on interest rates, keeping them near zero as long as unemployment stays above 6.5%, and is focused on creating a more inflationary environment that floats all boats, says Waldock.

A cutoff of oil, gas, and wheat from Russia and Ukraine could potentially benefit U.S. energy companies and farmers if Europe needs to turn to other sources of supply—but that too would not be without some broader economic ramification at home as consumer prices here would be affected by supply and demand. And while leading economists predict U.S. economic growth will improve this year, it’s predicated on having no major global crises. Otherwise, all bets are off.

Turning back to diamonds, Russia’s Alrosa produces about one-third of the world’s diamonds by both volume and value; mainly better qualities and bread-and-butter goods under one carat. Economic sanctions against Russia would most certainly affect diamond supply, and by extension, prices. Most of the price increases would be for rough, but with retailers in the United States—the largest diamond market—under pressure to keep prices down, a squeeze would fall hardest on manufacturers.

President Obama favors economic sanctions against Russia, but key leaders in the EU—such as Britain’s David Cameron and Germany’s Angela Merkel—are reluctant, given how much of their own economies depend on Russian investments and energy. U.S. sanctions alone would have little to no impact on diamond prices, for two reasons: one, it’s easy enough to route Russian goods through other trading centers; and two, given the glacial pace at which the global diamond industry passes amendments to the Kimberley Process, support for a boycott of Russian goods or dropping Russia from the KP altogether is unlikely, to say the least.

Sometimes even the threat of sanctions can be as effective as actually imposing them. With both the Russian stock market and the rouble plummeting since Putin moved into Crimea, his announcement that he doesn't plan to annex Crimea suggests there’s already internal pressure on him to back down. And if Russia’s industrial oligarchs think their assets abroad might be frozen, they’ll turn up the heat as well.

Previous article:
How To Deal With Shopping Cart Abandonment And Close The Sale Online

Next article:
Are You Protected From “Slip and Fall” Lawsuits?