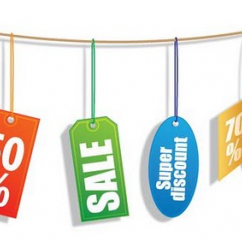 Scottsdale, AZ—It’s one thing to compete with diamond prices on the Internet, but when a so-called wholesaler opens in your market, what’s the best strategy for a luxury jeweler to compete in its own backyard?

In a special limited-edition retailer workshop during this year’s Centurion Scottsdale jewelry show, about two dozen retailers got up early to share tips and strategies for dealing with a wholesaler in the market.

Moderated by Lori Roberts and Jennifer Demmary of Reis-Nichols in Indianapolis, IN—which recently got just such a store in its own backyard—the participants focused on both some time-honored strategies like selling romance and expertise, and some new, more aggressive strategies, like showing the same diamond with two certificates.

That, in fact, is exactly what Reis-Nichols did. “Wholesalers prey on the uninformed,” said Roberts bluntly. In a classic example of how a little knowledge can be dangerous, the consumer may know that they’re only supposed to buy diamonds with certificates, but they don’t know that different labs have different grading standards. At Reis-Nichols, they offer a simple but powerful graphic example: in the showcase sits one stone with two certs, one from GIA and one from an overseas lab. GIA’s grade on the stone is much lower than the other lab. 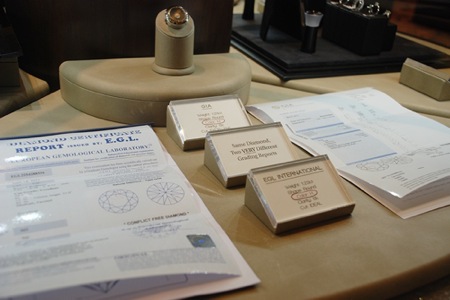 “You have to shop the competition. You have to know the presentation your customer is going to get at the other place,” emphasized Roberts. Then, on your end, the staff has to be on board and super-trained, and you have to decide how aggressive you want to be. But even if you want to be aggressive in fighting misinformation, you have to take a positive approach. It’s very easy to get defensive, said Roberts, and that’s not the position you want to take. 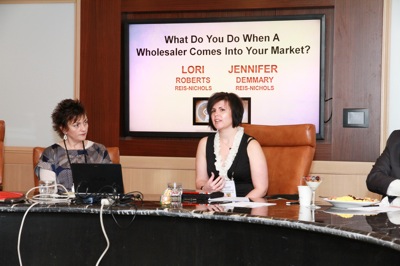 Lori Roberts, left, and Jennifer Demmary of Reis-Nichols in Indianapolis, IN.

“Remember, the bride wants to be proud of where her ring came from,” she said. Does she want to tell her friends her fiancé got the ring at a bargain store, or does she want to say it came from the best jeweler in town?

But the proliferation of labs—and grading standards—makes it very tough to help the customer differentiate. In fact, sometimes it’s even hard for the staff to differentiate, Roberts said. You can start with GIA but by the time you get down to the other labs, they’re confused and think they’re all like GIA. All the jewelers present agreed that GIA or AGS are the only two certs they use. 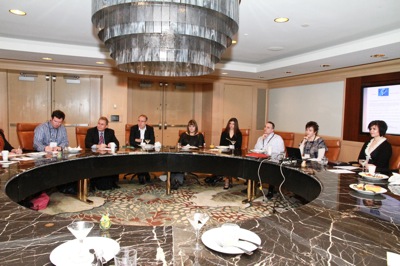 The limited-edition retailer roundtable on competing with a wholesaler was filled to capacity.

Phil Bozen of Von Bargen’s Jewelry in Vermont will happily log onto Blue Nile with the customer. He asks the customer to narrow down a cert grade they’re looking for, then enters that and pulls up the list. Then he shows the proof: many stones, many prices, all with the same grade. Obviously there’s a reason why the prices vary—sometimes by thousands of dollars, he explains to the customer.

Ray Lantz of The Diamond Center in Claremont, CA, likes the time-honored “sell the romance” strategy. He immediately deflects the discussion away from the whole issue of prices and certs. He tells the customer, “let’s put all that aside for the moment, and just tell me first, ‘why her?’” Usually, once the groom starts talking about his love, the whole cert/price issue fades into the background and he’s more focused on making her happy and proud, and more amenable to listening to the jeweler’s rationale for the better stone.

David Friedman of Sarah Leonard Fine Jewelers in Los Angeles—just minutes away from the lure of the huge L.A. diamond and jewelry district—says a good way around the entire discussion is to offer specialty cuts the customer can’t get elsewhere, like the Royal Star.

Dan Kulchinsky of Mayfair Jewelers on Long Island, NY, brought up an interesting point: it’s much easier to sell two big diamonds than one. “What’s easier to sell, diamond studs [earrings] or an engagement ring?” he asked his peers, who unanimously nodded and answered, “studs.” 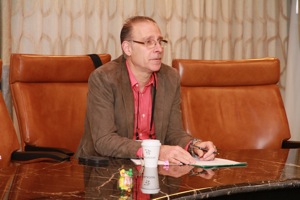 Dan Kulchinsky of Mayfair Jewelers pointed out that with half the effort it takes to sell one engagement diamond, jewelers can sell two equally big diamonds for stud earrings.

But Reis Nichols’ Demmary warned that’s changing. “Diamond studs are not the slam dunk they used to be,” she said.

A big issue for retailers competing with a wholesaler is selling to the customer that’s already left a deposit at the “wholesale” store. It’s a high-pressure selling tactic used to “hold” their stone, but it’s very uncomfortable for the customer if they decide not to buy that stone. Not only does the heat get turned up, but some places have gotten downright nasty to customers who want their deposit back.

As for making a profit on diamond engagement rings, two oft-heard refrains popped up again in the session: focus on the mounting, not the center, and buy off the street.