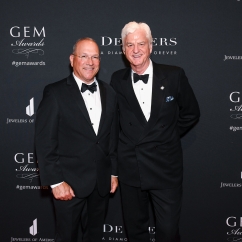 The winners in the categories of Jewelry Design, Media Excellence and Retail Excellence were revealed live to an audience of more than 500 press and jewelry industry representatives.

The GEM Award for Media Excellence was awarded to Melanie Grant, presented by two-time GEM Award winner Marion Fasel. Annabel Davidson and Daisy Shaw-Ellis were the other nominees.

Lorraine Schwartz brought the goods when she was presented with the GEM Award for Jewelry Style. The audience was treated to tribute videos from several celebrities, including Kim Kardashian, Tina Knowles and Pharrell. Blake Lively then took the stage to present the GEM Award to Schwartz, who thanked her beloved family, clients and the jewelry industry saying, “I am really so grateful to the industry. We really do have a lot to say, and we can do so much for the future generation.”

Stephen Lussier was honored with the GEM Award for Lifetime Achievement for setting a standard of excellence that has pushed the diamond industry forward in pursuit of the diamond dream. In his speech, he said, “Consumers want to associate with the categories of products and brands that share their values. That to me is the new part of the diamond dream.” Charles Stanley presented the award to Lussier.

Jewelers of America’s Amanda Gizzi served as the host for the evening with GEM Awards Chair Randi Udell Alper of London Jewelers provided a welcome video.

Previous article:
Aether Diamonds Announces Appointment of Alain Bernard to Board of Directors