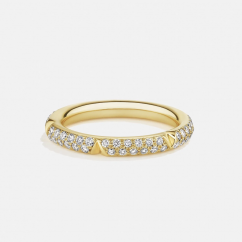 New York, NY--Aether Diamonds announced in a press release its first line of sustainable fine jewelry with the Bombé Collection.

The company stated in the release that it makes diamonds from atmospheric carbon, using carbon sequestration technology to pull CO2 directly from the air and transform it into diamonds, noting that each carat of diamond sold by Aether offsets customers' carbon footprints for over one year.

"We've been waiting to show the world what's possible with our Diamonds, and we are thrilled to introduce our Bombé Collection," said Ryan Shearman, Co-Founder and CEO at Aether, in the press release. "It's a collection that proves that luxury and sustainability can come together seamlessly with great design, diamonds from air, and Fairmined Gold; a unique combination that signals where jewelry is heading."

The Bombé Collection, designed by Jenna Housby, Chief Design Officer at Aether Diamonds, was inspired by New York's enduring ability for social and economic revival. From the Roaring Twenties to Studio 54, this collection embodies the narrative of alleviating future uncertainty, overcoming adversity with bold self-expression, and a desire to create something better. The release adds that not only was Studio 54 a celebration of life, but also ambitious in its vision to move culture forward as one of the first non-judgmental, queer-friendly, mainstream nightclubs.

Read more in the entire release.

Next article:
Know the Difference in Gold Karat, Plated, Solid and Filled With Blakeman’s Fine Jewelry