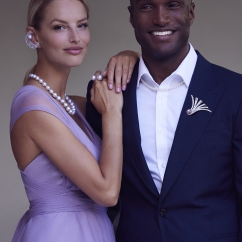 The campaign debuted in the September/October issue of W magazine. The print campaign includes four color pages and spreads throughout this fall and the next year in publications that include W, Town & Country and Architectural Digest. Author and jewelry historian, Vivienne Becker, served as creative consultant for the campaign copy.

In addition, the company says its $500,000 campaign will be supported by a brand video on YouTube and the Assael website, as well as in reels on fashion social media platforms.

Also filmed on video and drone by Tony Michel at a private beachfront estate, the campaign creative highlights “elegance with attitude,” focusing on the panache of contemporary luxury lifestyles.

“I think it can best be described as elegance with attitude, across generations, genders, and lifestyles,” said Grosz. “Assael, after all, coined the phrase ‘The Pearl Revolution,’ now an international jewelry and fashion phenomenon. As North America’s premier source of the most magnificent pearls in the world, it is time to explore our unrivaled quality and exciting new designs that show how the history and story of pearls has evolved.”

Highlighted in the campaign are new pearl designs from the Bubbles Collection by Sean Gilson for Assael. It includes classic Assael strands, sautoirs, earrings, and rings, as well as exciting new jewels from the colors, pairings, and modernist collections. It’s designed to be worn by all genders with fresh, contemporary styling, the pearls come to life in both casual and couture designer attire, reflecting the elegance with attitude theme.

The gender-neutral campaign includes pearl strands, brooches, and a single earring being worn by Lorenzo in both business and casual attire.

Previous article:
This Glittering Detail From Queen Elizabeth’s Funeral Was Easy To Miss

Next article:
Four Items In Morgan’s Jewelers’ Highlight of the Week