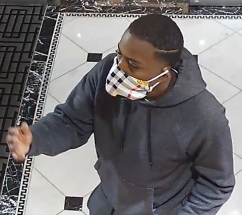 Austin, TX—The Austin Police Department Robbery Unit is investigating a robbery that occurred on Saturday, February 13, at the Marc Robinson Jewelers store located at 2901 South Capital of Texas Highway in the Barton Creek section of Austin. The jeweler, a member of the American Gem Society, has four locations in the Austin area.

Seven individuals are suspects in the robbery. Two suspects entered the jewelry store prior to the robbery and remained in the store until the robbery took place, according to the City of Austin website. Other suspects then entered the store, committed a smash-and-grab and threatened one of the employees. The suspects fled the business on foot and possibly left in a vehicle. There were no injuries reported.
Suspect 1 (top image) is described as:

Suspect 2 is described as: 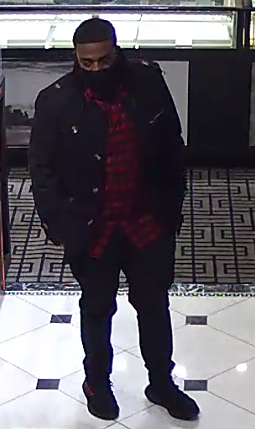 Detectives are asking anyone with information about this case to call the Austin Police Department Robbery tip line at (512) 974-5092, Crime Stoppers at 512-472-TIPS, submit a tip on the Crime Stoppers website or use the Crime Stoppers app. All information is anonymous and may be eligible for a reward of up to $1,000. Tips also can be submitted anonymously through APD’s mobile app, Austin PD, which can be downloaded for free on iPhone and Android.

Next article:
Celebrity News: Maren Morris In Le Vian At the Grammys