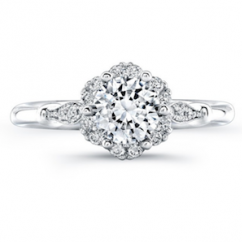 New York, NY—Despite a long, steady decline in the wholesale price of diamonds, the average price paid for an engagement ring in the United States rose almost 25% in the past two years, from $5,095 in 2015 to $6,351 this year, according to The Knot 2017 Jewelry & Engagement Study. The biannual report surveyed more than 14,000 engaged or recently married brides and grooms to find out everything from how they met (online is the most popular) and how they proposed. One in four grooms reported planning the proposal moment down to the last detail, with time-honored tradition on the rise. Nine out of 10 grooms had the ring in hand, 87% went down on bended knee, 91% used the words “will you marry me?” and 78% asked their partner’s family for permission first. More proposals took place in public, and couples even had video or photos to record the moment. Not surprisingly, fewer brides reported being surprised (only about one-third).

Here were some of the other top statistics from the study:

Additionally, the study found one in four couples begin discussing marriage two or more years before getting engaged, and couples today are more likely to discuss important issues—like children, finance, pets, sex, and religion—before getting engaged than couples did in the past.

For same sex couples, The Knot’s 2016 LGBTQ Weddings Study found engagement ring spending was $5,719 for men and $5,349 for women. (LGBTQ price figures weren’t broken out of the 2017 Wedding Study.) Gay men grew more likely to insure their rings between 2015 and 2016: the figure more than doubled from 26% to 60%. For lesbian women, a diamond center stone with side stones was the most popular engagement ring choice, though 30% still prefer a simple solitaire.

In 2017, 30% of female and 11% of male LGBTQ couples reported being turned away from various wedding vendors or were made to feel uncomfortable because of their identity. The study didn’t break out whether jewelers were among those vendors, but it did emphasize that same-sex couples seek wedding vendors that are equality-minded and show support for same-sex marriage. An overwhelming majority of LGBTQ couples agreed that vendors should clearly communicate that they are LGBTQ-friendly; more than 90% of those couples will specifically seek out those vendors.