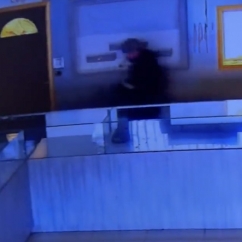 Nashville, TN--Surveillance cameras caught a burglar entering a jewelry store through its roof on June 12.

According to a local brews report, an alarm went off around 6 a.m. at Ahmed Jewelry on Nolensville Pike. Per the report, surveillance video footage shows a man dropping into the store through the roof. He was wearing athletic shoes and gloves. He was also hiding his face.

Here is a video of the incident.

The report stated that the man grabbed items worth thousands of dollars and left through the ceiling. "They could have put a gun on his head when he was opening in the morning, and God knows what they could have done to him, so it's really scary," an anonymous relative of the store owner told the news outlet.

The family told the outlet that they were possibly targeted as they reviewed recent camera footage to find out a man appeared to be filming the storefront.

Per the report, the police responded two hours after the alarm went off. No one was arrested.