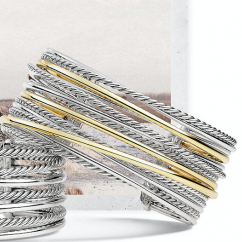 New York, NY—Jewelry megabrand David Yurman is laying off 98 workers in its corporate offices, mainly in marketing, product development, engineering, and finance. According to reports the company, which had placed many employees on furlough at the start of the pandemic, began the permanent layoffs June 30. Its filing with the New York Department of Labor called the cuts a result of “unforeseeable business circumstances prompted by COVID-19,” and the company told WWD “these challenging decisions were made in order to ensure a healthy business for the future.” (Image: cuffs in Yurman's signature cable motif.)

Yurman’s and other luxury, fashion, and retail layoffs come despite some solid retail numbers in May and June. May experienced an 18.2% jump in retail sales, the biggest monthly increase since the government began tracking sales in 1992—though it’s admittedly off a very low base. June retail sales unexpectedly also rose, albeit a more modest 7.5%, but nevertheless beating analysts’ expectations of a 5% gain. And fine jewelry has been performing well.

But the recent surge in cases of COVID in some parts of the country may derail the nascent recovery, say analysts. Unemployment nationwide is already well above that of the Great Recession, and the list of major American companies who have announced impending large layoffs is substantial.

Meanwhile, David Yurman joins the likes of Nordstrom, which laid off close to 6,000 workers nationwide, cut its executive salaries, and is not paying president and chief brand officer Pete Nordstrom and CEO Erik Nordstrom or other board members for a portion of the year.