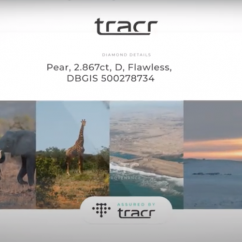 London, UK—Tracr, De Beers’ technology platform built on blockchain to provide traceability for diamonds, has been recognized by Forbes as part of its ‘Blockchain 50’. This represents the second time that Tracr has been featured on the prestigious list of leading blockchain innovations.

The Tracr platform combines the powerful technologies of blockchain, the Internet of Things, artificial intelligence, and high-grade security and privacy controls to immutably trace a diamond’s journey as it passes through the value chain.

Wes Tucker, head of digital transformation for De Beers Group, said, “We’re delighted that Tracr has once again been recognized by Forbes as one of the leading blockchain innovations globally. With interest in traceability and provenance growing rapidly from a wide range of industry stakeholders, solutions such as Tracr will become increasingly important. And as the only truly distributed blockchain traceability platform in the diamond industry, we see a very bright future for Tracr.”

Tracr has seen rapid progress since its launch, having registered more than 400,000 diamonds worth around $2 billion to date, an increase of 50% since January 2021.