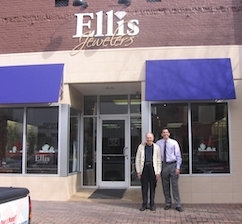 Concord, NC—Ellis Levinson knew about many couples’ plans to marry well before they ever told their families. Image: The late Ellis Levinson and his son, Ellis Fine Jewelers' current owner, Dan Levinson, outside the newly remodeled store in 2012.

That’s because “Mr. Ellis,” as the late founder of Ellis Fine Jewelers always was called, had built up such a reputation of trust that Concord-area couples planning to get engaged often came to see him first to look at rings. He also was also willing to be the first to extend credit to young couples—often as young as 18—who he knew to be employed and of good character. Mr. Ellis was the son of a jeweler as well, but his father, Morris, had never owned the current business.

In a recent column in the Independent Tribune, the jeweler—now owned by Ellis Levinson’s son, Dan—was celebrated for its place in the community. Ellis Levinson founded the store in 1953, and Dan Levinson began working there full-time in 1989, after graduating college. He learned every aspect of the business of running a successful retail jewelry store, from gemology and diamond buying to financial management, says the article.

The senior Ellis died in November 2020. The Independent Tribune article recounts his dedication to giving back to the community:

Ellis Jewelers remains in the original downtown Concord location is opened in July 1953. The store has been remodeled, however, with the original showcase windows lining the front entry alcove being absorbed into the interior of the store, and with some of the store’s mid-century retail façade stripped away to reveal the original brickwork of the building. 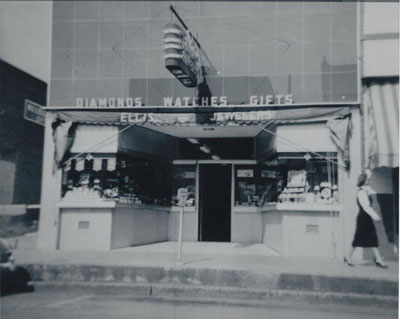