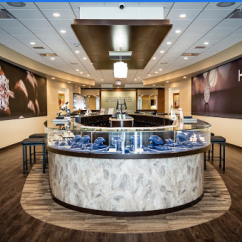 Sioux City, IA—Greenberg’s Jewelers was featured in the Sioux City Journal on Sunday, following the jeweler’s move from the city’s Southern Hills Mall to a 3,200-square-foot standalone location in the Shoppes At Sunnybrook.

The jeweler, a third-generation business and member of the Leading Jewelers Guild, is one of the industry’s centenarians. It's also the oldest continually operating retailer in Sioux City, says the paper.

Jacob Greenberg opened a jewelry store in downtown Sioux City in 1900, with the mission to provide the best diamonds, the best service, and the best value. In 1943, his son, Ray, joined his father in the store and Ray's wife Ann came into the business nine years later. Today, Ray and Ann's daughters, Amy and Elise, together with their husbands, run the seven-store chain, which has five locations in Iowa, and one store each in Omaha, NE and Sioux Falls, SD. The jeweler also is well known in all cities for its philanthropy, a tradition carried down from Ray and Ann Greenberg.

The Sioux City Greenberg's store moved into the Southern Hills Mall when it opened in 1980, one of the mall's original tenants. But today, many retailers like Greenberg’s increasingly prefer open-air shopping centers that offer convenient parking and a lease-line door opening directly outside, instead of an enclosed mall.

The new location features an expanded selection and the family has dubbed it the “Diamond Galleria,” says the paper. It also features a wine bar, a beverage center, and a TV lounge for relaxing while a spouse or partner shops. Greenberg’s carries an extensive line of designer and brand-name jewelry, including Hearts On Fire, A.Jaffe, Shy Creation, and many more. Ann Greenberg also designs an exclusive line of signature bridal jewelry. 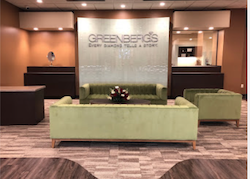 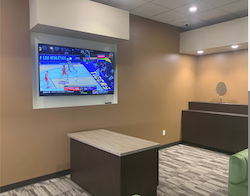 Greenberg's new store offers a relaxing lounge with a big-screen TV, as well as a wine bar and a beverage center.