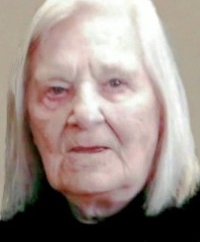 Ankeny, IA—Harriet Ann Hastings Long, longtime owner and operator of the former Long’s Jewelry store in Webster, IA, died September 18. She was 96. Image: The Brookings Register
Born in Volga, SD, in 1924, she married Richard Long in 1946, while he was training as a watchmaker in Elgin, IL. After completing his training, he worked in a local jewelry store before returning to his hometown of Webster, where the couple opened Long’s Jewelry store, which was open for 70 years.

Harriet Long worked in the couple’s business well into her 90s, continuing to run the store by herself after her husband’s death in 2015. After she fell and broke her hip in December 2018, she closed the store to move closer to family.

Long is survived by two nephews, six nieces, a sister-in-law and several great-nieces and nephews.