Born in 1929, Margaret "Lucia" Brown was the only child of the late Burder and Mildred Brown. A lifelong resident of the Asheville area, she was educated in the Asheville City School system and graduated from Lee Edwards High School. She was a lifelong member of Calvary Baptist Church. In 1948, she married the love of her life, the late Paul P. Greene, with whom she owned and operated Wick & Greene Jewelers for decades. They were married for 63 years and had two children, Michael and Paula.

Before joining Paul in the jewelry store, Lucia worked as an operator at the Southern Bell telephone company, was a bookkeeper and personal assistant at Matthews Ford, and joined the jewelry business after her children were in school. Together, Lucia and Paul grew the business to become one of the nation’s leading luxury jewelers. With the sale of the store to granddaughter Eva-Michelle and grandson-in-law Elliott Spicer, the store was transformed into Spicer Greene Jewelers and remains a fourth generation Asheville institution.
Lucia was a great philanthropist and animal lover, often joking to family that while she loved them, she REALLY loved her dogs! Family members say she taught everyone she knew compassion, humility, generosity, perseverance and love. She will be missed, but her sweet and feisty spirit will forever be a part of everyone who knew her.
She supported many causes benefiting Calvary Baptist Church, local animal agencies, and her beloved Asheville, where, with Paul and son Michael, she contributed a tremendous amount to the revitalization of downtown Asheville in the 1980s, with the construction of Wick and Greene Plaza.
Predeceased by Paul in 2011, Lucia Greene is survived by son Michael and daughter-in-law Eva; daughter Paula Greene Webb and son-in-law Steve; grandchildren Christopher Webb (Jennifer), Paul Webb (Jessica) and Eva-Michelle Greene Spicer (Elliott); and great-grandson Caleb Webb.

Due to the current COVID-19 crisis, services will be private with a celebration of life to be announced at a later date.

Read more here, and an online memorial is available here.

Mesa, AZ—David O’Donnell, co-owner of Arizona Diamond Center, died April 20 after suffering a stroke. O’Donnell, a member of the Leading Jewelers Guild, owned the three-store business with his brother, Dan.

In addition to his brother, O’Donnell is survived by his wife, Bernadette, and children, David (Tara) and Katie (Matt). In lieu of flowers, the family asks that memorial donations to honor his compassion and celebrate his life be made to Save the Family, a non-profit organization dedicated to caring for families who need it most. 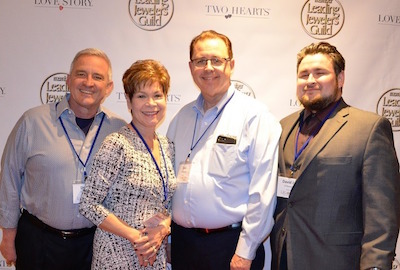