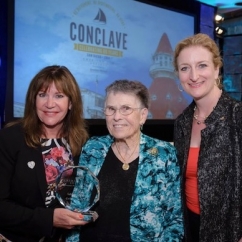 Los Gatos, CA—Sallie Morton, ECG, the first female president of the American Gem Society and a trailblazer for women’s advancement in and out of the jewelry industry, died October 24 at age 91. At left, L to R: Jewelers Cathy Calhoun, Sallie Morton, and Laura Stanley.

Born November 8, 1925 in Reno, NV, Sallie Miller graduated from the University of Oregon with a degree in accounting and originally pursued a career in that field. She enjoyed success at Skinner & Hammond, a San Francisco CPA firm, but upon moving back to Reno in 1947 and applying for work at the only CPA firm in town, she was promptly told, "If you were a man I'd hire you immediately."

That undoubtedly was the genesis of her indomitable spirit and determination to pave a path for the advancement of women in the workplace.

In September 1949, she married MacDonald G. Morton, a budding watchmaker from Riverside, CA. Sallie moved to San Jose, CA, where Morton was a senior in the watchmaking program at San Jose State. Four years later, in 1953, the couple opened a small watch repair shop inside Bettencourt’s grocery store in San Jose. That was the beginning of Sallie’s interest in jewelry and gems.

In 1955, the Mortons moved to a larger location and Sallie grew more serious about her interest in gems, adding formal gemology studies to her accounting skills. It was during this time that Morton Jewelers became members of the American Gem Society and Sallie earned her Certified Gemologist designation in 1962. She traveled the world, exploring gold and diamond mines in Africa, opal mines in Australia, gravel pits in Sri Lanka and Brazil, pearl farms in Japan, and even seeing the Crown Jewels in Iran. Her travels led to a legendary second jewelry career as a renowned expert and lecturer on gemology and jewelry. She traveled to all 50 states, gave well over 200 lectures to service clubs and in the industry, and often served as a spokesperson for AGS on radio and television.

In 1964, Morton Jewelers moved to Town & Country Village in San Jose, where it remained until 1988 when Sallie moved the business to Los Gatos and, ultimately, sold it to retire in 1993.

Paving a path for women was a goal of Morton’s. If accounting was largely a man’s world, the jewelry industry in Morton’s time was even more so. Women weren’t admitted to many of the industry’s organizations, and most business conventions were affairs where men attended the meetings and their wives (even those that worked in their family stores) took side trips for amusement.

Sallie Morton was a popular lecturer in the jewelry industry and a fierce advocate for women's advancement.

Morton would be the groundbreaker to change all this. In 1977, she was named the first woman president of AGS, serving the usual two-year term until 1979, but she remained an AGS board member trustee from 1980 to 1992.

In 1982, Morton broke ground again, becoming the first woman to receive the Society’s prestigious Shipley Award for her outstanding service and significant contributions to AGS. When a fire destroyed the Los Angeles AGS headquarters in 1983, Morton organized a fundraising event to buy a building. "We needed to raise $1 million. Not only did we meet that goal, we exceeded it. We raised $1.3 million and were elated," she recalled in an interview at the time of her retirement in 1993. Morton was honored again by AGS in 2014, with the inaugural "Sallie Morton Award" established to recognize exceptional involvement and service with AGS guild chapters.

Laura Stanley, a longtime AGS guild leader said, “She was such a sweetheart. She had been so happy with the guilds activity at AGS over the last few years. The day I called to tell her we were naming an award after her, she was absolutely speechless. Several years ago, she donated her Shipley pin back to AGS for the next female winner to receive. Thanks for being an inspiration to all our guildies!”

Katherine Bodoh, CEO of AGS, said in a Facebook announcement of Morton’s death, “Ms. Morton’s contribution to the American Gem Society will never be forgotten. We are forever grateful for all she has done for our association.”

In 1986, Morton became the second recipient to be inducted into the Hall of Fame of the then-fledgling Women’s Jewelry Association (the late Hilda “Peggy” Kirby, vice president of Finlay Fine Jewelry, was the first.) WJA had been founded a year earlier to give women the kind of business networking opportunities they were barred from in the men’s clubs.

After the founding of WJA, the rest of the jewelry industry began slowly opening its doors to women, but Morton’s passion for women’s advancement wasn’t limited to our industry. In 1987, she was one of the first dozen women to become a member of the Rotary Club of San Jose. She was an active Los Gatos Toastmistress before Toastmasters accepted women, then later became a San Jose Toastmaster, as well as a board member of Santa Clara, CA Girl Scout Council. 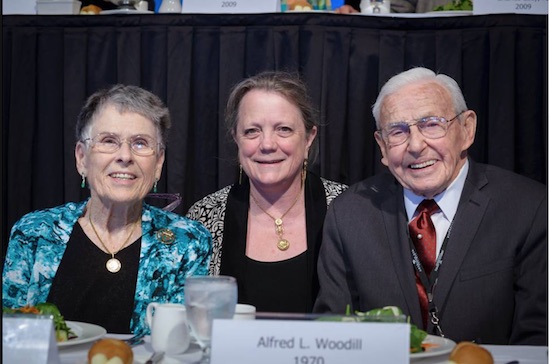 Upon her retirement from the jewelry industry in 1993, Morton said, “Now is the time. I want to travel throughout the United States in my motor home and spend time visiting friends." Indeed she did. Throughout her 18 years as a Rotarian, she returned to the lecture circuit, sharing tales of traveling more than 84,000 miles in her 28-foot Bounder motor home, towing a car. She formed a Bounder United Singles chapter and was active in various other motor home organizations.

As a survivor of uterine cancer-causing lymphedema, she was an active advocate for the National Lymphedema Society and spent many hours volunteering. In 2013 she was diagnosed with mesothelioma, the result of asbestos discovered in the roof of the Town & Country Village structure that had housed Morton Jewelers for many years. In true fashion, she beat a grim hospice prognosis and remained an active resident of the Resident Council at the Terraces of Los Gatos, where she had lived from 2010 until her death last week.

In her senior years, Morton stayed active through her affiliation with Good Samaritan Hospital's h2u Trips and Tours Travel Program. For years, she was an escort, chair of the program, and served as president of h2u. As co-founder in 2005 and past Queen of the EverREDdy Trippers Red Hat Society, she enjoyed her monthly outings with a close group of friends.

To many of the Terrace's residents, Dixieland music and Sallie Morton were synonymous. Concerts of the South Bay Traditional Jazz Society with its Top of the Hill Jazz Band were a popular event there and, not surprisingly, Morton also served as treasurer of the Society. She also took her Bounder to various jazz festivals and went on jazz cruises at sea.

When asked about her secret to success in a 1993 interview, she said, "Treat people the way you want to be treated—with respect, honesty and integrity."

On a personal note, I didn't know Morton very well, but she was a close friend of George Holmes, the legendary editor-in-chief and my predecessor at  JCK. When I met her again during my own tenure as editor-in-chief of JCK, she was delighted to see how many women had risen to management roles in the industry, and we discussed the progress that had been made--and how much more had yet to be made. Undoubtedly, seeing both her beloved AGS as well as GIA headed by women was gratifying.

Preceded in death by her husband MacDonald, Morton is survived by her son Philip and daughter-in-law Debbie, granddaughters Melissa and Candace, and great granddaughters Cassidy and Ava.

A memorial service will be held November 4 at The Terraces of Los Gatos, from 2:00 to 4:00 pm. In lieu of flowers, the family requests a donation to Compassion & Choices, P.O. Box 485, Etna, NH 03750, or to your own favorite charity. For more information about mesothelioma, click here.

Next article:
The Centurion Video Series: Building a Great Workplace