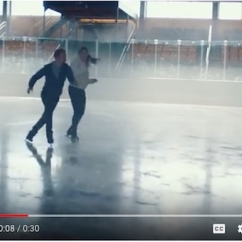 New York, NY—The Diamond Producers Association, through its Real is a Diamond campaign, partnered with The NBCU Content Studio on new custom video content that launched during the live on-air and digital broadcasts of the 2018 Winter Olympics in Pyeongchang, South Korea.

“The Making of a Gem” is a series of three video shorts developed to showcase the striking similarities between the unique journey of an athlete on the rise and that of a diamond, tapping into the emotional context of a diamond’s symbolic meaning. The videos were created through the perspectives of a snowboarder, ice skating duo, and a women’s ice hockey team, to demonstrate the natural forces and elements that forge both diamond and competitor. (Click on the links above or the images below to watch each film.) 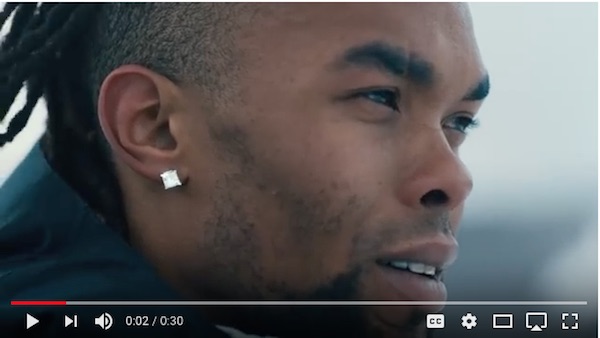 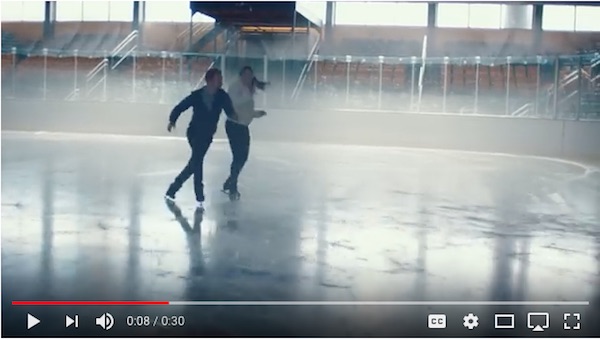 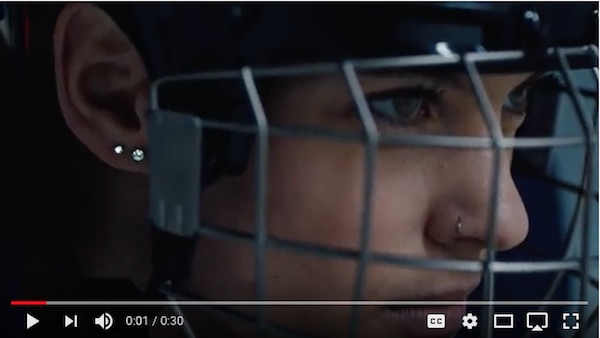 Stunning sports performances in icy winter environments contrast the beauty, purity and precision of each sport with the pressure and commitment required to transform natural promise into a unique achievement of enduring strength and brilliance. The final beat in each emotional and inspiring story links the athletes’ authentic talent and excellence with that of a one-of-a-kind diamond.

“The breadth of common themes was surprisingly rich, and made for seamless and layered storytelling,” said Deborah Marquardt, chief marketing officer for the Diamond Producers’ Association. “Like diamonds, the immense pressure and the deep inner forces competitors must endure in order to grow strong, find their edge and ultimately shine is an ideal narrative to explore during our most cherished and meaningful celebration of sport and human connection.”

“Having a partner like Real is a Diamond enabled us to develop these unique stories, connect with an exciting cultural moment, and bring diamonds to audiences in contextually relevant environments both on and off the NBCU portfolio,” said Wendy Wildfeuer, senior vice president, The NBCU Content Studio.

Stylist Tanya Dukes chose the featured jewelry, explaining, “In each film, we styled the athletes in realistic, current diamond jewelry that they’d actually wear, including some of their own pieces.  The jewelry was an authentic part of their personal style.”  She sourced pieces from a range of diamond jewelry designers including Sydney Evan, Jade Trau, Ritani, Sethi Couture, Barbela, Hearts on Fire and Forevermark.

“The Making of a Gem” series launched across NBCUniversal’s digital and social platforms on February 5 and began airing on the linear networks on February 10. The films will be distributed through NBCUniversal’s portfolio-wide platform across social, video programming, and the company’s strategic partnerships with Apple News and Vox Media. Videos and supplemental content will also run on Real is a Diamond-owned and operated channels, as well as in cinemas.

London, UK—Demand for gold demand rallied in the closing months of 2017, but it wasn’t enough to stop a full-year decline of 7%, says the World Gold Council’s Gold Demand Trends Full Year 2017 report, published last week. Although the fourth quarter 2017 jumped 6% from the same period in 2016 and gold jewelry sales are on the upswing, investment proved a drag on the metal as central banks’ net purchases were down 5% over 2016, and bar and coin demand fell 2%.

On the upside, full-year gold jewelry demand increased by 4% to 2,135.5 tons; the first year of growth since 2013, driven by recovery in India, the United States, and China. These three markets together accounted 95% of the increase in global full-year demand. 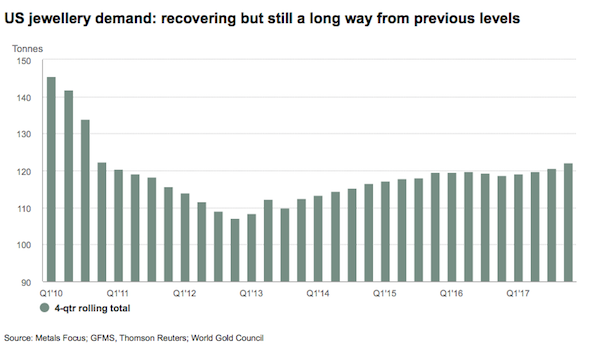 Although industrial uses comprise a small percentage of gold consumption (compared to platinum, which is strongly driven by industrial use) that’s changing with electronics. The increased use of gold in smartphones and vehicles sparked the first year of growth in technology demand since 2010; the wireless sector was the outperformer in gold technology demand.

Total supply dipped 4% last year, said the report. Mine production inched up but recycling fell 10%. The sharp drop in recycling was a normalization of the market after unusually high recycling levels in 2016.

WJA Announces 2018 International Board of Directors

New York, NY—The Women’s Jewelry Association (WJA) has elected Jenny Luker (below), president of Platinum Guild International, as the new president of the WJA International Board of Directors. She and the other officers will serve a two-year term. 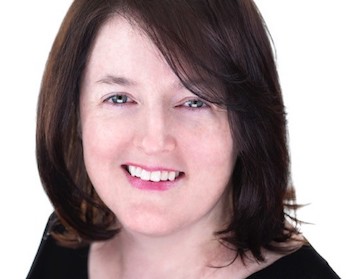 “I’m delighted to serve as the new president of the Women’s Jewelry Association,” says Luker. "We have a new executive committee and a board reflecting our diverse membership in terms of geography and segment of the industry. This gives us a chance to view our mission with fresh eyes. The range and depth of experience of our board members, and our strong regional chapters and affiliates are our greatest assets. I look forward to all that we will accomplish in the next two years.”

Four newcomers have also been elected to the WJA Board. They include Molly Bell, Jacqueline Cassaway, Brenda Gamba, and Kendra Bridelle, a former WJA president serving as liaison to the Board from the WJA Advisory Council. Gamba serves ex officio. She is the new president of the WJA Foundation board, which manages the grants and scholarships program as a separate 501(c)(3) organization.

“We’re delighted to debut the DC Show this fall,” says show director Jordan Brockhaus-Spears, Show Director. “We’ve carefully positioned it in a large metro area for arrival and departure convenience, and also found the perfect corner of the area for the Show’s location, with great shopping and restaurants nearby, and of course, top exhibitors. We’re excited to share the new show with the industry.”

Each Select Show features industry education, complimentary breakfast and lunch, an evening cocktail party, and a raffle where attendees can win purchasing credits. To register, visit www.selectjewelryshow.com, (844) 285-1103, or email info@selectjewelryshow.com.

Next article:
Synthetic Diamonds In The Store: Jewelers’ Six Most Urgent Questions Answered