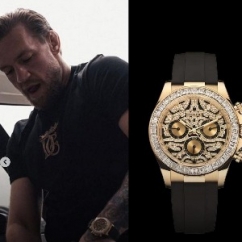 New York, NY--Conor McGregor has made quite a name for himself in mixed martial arts. One of the world's highest-paid athletes, the Irish professional MMA artist has made quite a bank, with some of his fights earning him as much as $33 million.

In April 2021, McGregor successfully cashed out $150 million from selling most of his stakes in his Irish whiskey business, which is now available in eight countries, including the U.S.

With multiple endorsements and a high-match fee, the fighter has ample to spend, and he does so by investing in some top luxury watches.