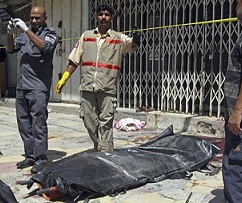 A grim reminder today of the continued bloodshed in Iraq has also touched the international jewelry industry with tragedy.

Officials in Iraq say gunmen have killed fourteen people as they robbed about a dozen jewelry shops in the capital, Baghdad. Eyewitnesses say the masked robbers used explosives and guns fitted with silencers to attack the shops located in the southwest of the city.

Many of those killed were either the jewelry shop owners or people who worked there. The robbers are believed to have fled with large quantities of gold. Police say one of the robbers was killed by security forces.

Four policemen were injured in the shootout.

This story was reported by www.AustralianNetworkNews.com and in the weekly email newsletter of Canadian Jeweller magazine, amongst other news services.