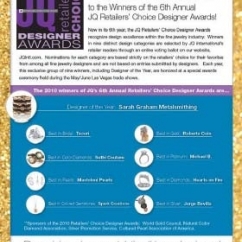 JUNE 2010, LAS VEGAS, NV--JQ International Magazine has announced the winners of its 6th annual Retailers' Chouce Designer Awards. The awards recognize design excellence within the fine jewelry industry. Winners in nine distinct design categories are selected by JQ International's retailer readers through an on-line voting ballot on the magazine's web site. The nominations are based strictly on the retailers' favorite pics rather than on submissions from designers. The winners named by JQ are shown below and they were all honored at at a special awards event in Las Vegas in June.

Designer of the Year--Sarah Graham Metalsmithing

Best in Diamonds, Hearts On Fire

Best in Platinum, Michael B