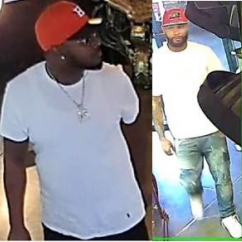 St. George, UT—The Jewelers Security Alliance reports a series of grab-and-run burglaries are believed to be the work of the same perpetrators. The two black male suspects pictured carried out a midafternoon (3:00 p.m.) grab-and-run of several pieces of gold jewelry from a store in St. George, UT. While the police were on the scene investigating this theft, a second grab and run by the same suspects was reported at another jewelry store nearby. In the second theft, the suspects were reported to have fled in a dark Subaru sedan.

Other reports indicate these two suspects have committed at least nine grab and runs during June 2021 in four states: Texas, Nevada, California, and Utah. Two of these were previously reported in JSA Crime Alerts dated 06/24/21 (Burleson, TX) and 06/17/21 (San Antonio, TX).

One suspect is described as mid-30s, 6 feet to 6’2” inches, heavy build, and heavily tattooed arms. The other suspect is early to mid 30s, with tattoos on his neck and both arms.

Separately, JSA reports two burglars in DeKalb County, GA, fired gunshots into a glass jewelry case and then fled with several pieces of jewelry. There has been a pattern of increasing violence in Atlanta-area jewelers, says JSA: its May 13 crime alert reported a shooting in a jewelry store in a Kennesaw mall, and its June 24 report detailed a gunpoint robbery in Atlanta.

Next article:
Celebrity News: Dilamani Jewelry Featured On ‘The Bachelorette’