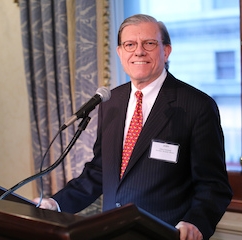 New York, NY – Jewelers of America (JA) and the GEM Awards Committee have announced that John J. Kennedy, president of the Jewelers’ Security Alliance, will be the 2021 recipient of the GEM Award for Lifetime Achievement. The award will be presented at the 19th annual GEM Awards, taking place as a virtual event on Thursday, July 15, 2021.

The GEM Awards gala honors the outstanding achievements of individuals or companies whose work raises the visibility and status of fine jewelry and watches. Kennedy is receiving this prestigious 2021 GEM Award for Lifetime Achievement for his committement to the health and safety of the jewelry and watch industry.

"I have known John Kennedy for 23 years and there is no one more deserving of receiving the GEM Award for Lifetime Achievement than him. John has been dedicated to improving the industry in every way, not only in all matters of security but in the spirit of improvement for business success in all facets of the industry. He has made a positive impact for retailers and manufacturers and continues to strive to make the industry a safe place for all. While security is John's main focus, he is truly established himself as a key resource and an industry leader for others to rely on. John is a true GEM and is the essence of what makes our industry so special,” says JA president and CEO David J. Bonaparte.

Kennedy is president of the Jewelers' Security Alliance, a non-profit trade association founded in 1883. JSA works closely with the FBI and police departments throughout the United States, and is dedicated to helping its 20,000 members avoid burglary, robbery and theft. The organization also produces regular bulletins about crime information to be shared among industry members.

Kennedy, an attorney, joined JSA full-time in January 1992. Prior to joining the JSA, he served as Assistant Commissioner and Deputy General Counsel of the New York City Department of Investigation, and as Assistant Counsel of the New York State Commission of Investigation. He is the co-author of JSA’s Manual of Jewelry Security and also has served as Secretary of the 24 Karat Club of The City of New York since 2002.

In addition to the GEM Award for Lifetime Achievement, Jewelers of America will be announcing the other GEM Award Nominees soon. Registration is now open for the virtual program and guests will have a rare chance to have a front row seat as GEM Awards pays tribute to the life and legacy of Tiffany & Co.’s Elsa Perreti, as well as the strength of the gem, jewelry and watch industry over the past year.

Sponsors – including GEM Awards Cornerstone sponsor Synchrony – will be treating guests to GEM Award cocktails in private circles for a personalized GEM Award Cocktail hour where guests connect and network in a manner that in keeping with the famous GEM Awards Cocktail Hour.

For details on GEM Awards, to register to attend the complimentary event, or to show your support for John Kennedy through sponsorships and the GEM Awards Journal, visit www.gemawards.jewelers.org