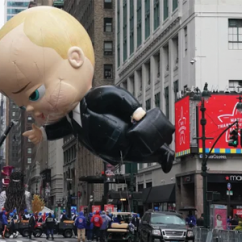 New York, NY-- Macy's 2020 Thanksgiving Day Parade aired on NBC last Thursday with fewer parade participants and no crowds lining the streets, all due to COVID-19 precautions. But according to a report on Deadline.com, the television production delivered ratings "steady" with 2019, which made it a successful show of strength for Macy's and NBC.

The image by Mega top left is of the Boss Baby balloon that debuted during this the 94th Annual Parade and was shown in the Deadline.com article. Macy's is featuring as full run of parade memorabilia gifts on its web site.

This followed on the heels of a very positive forecast last week for Holiday sales by the National Retail Federation (NRF), including an 11% increase in the number of people surveyed who want jewelry for the Holidays (20% up from 18% in 2019).

"NBC’s coverage of the annual Macy’s Thanksgiving Day Parade on Thursday morning drew a 5.3 rating in the adults 18-49 demographic and 20.7 million viewers, respectable numbers for a mostly pre-taped and pared-down event due to the coronavirus pandemic.

"The parade’s 9 a.m.-noon ET telecast (it was broadcast at that time across all U.S. time zones) was down two tenths from 2019’s restriction-free event, which finished with 22.1 million viewers. Overall, the year-over-year drops were 3% in the demo and 6% in viewers, and yesterday’s initial airing marked NBC’s highest-rated and most-watched entertainment telecast of 2020 during a TV season when most big events saw much bigger dips in their numbers.

"Combined with an encore later in the afternoon, the parade finished with a 6.2 in the demo and 24.2 million viewers in Nielsen Live+Same Day data. It also had 4.7 million streams on YouTube."