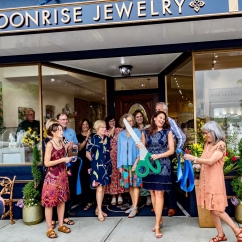 Cape Charles, VA--Moonrise Jewelry in Cape Charles celebrated its store opening at Mason Avenue with a ribbon-cutting ceremony by the ESVA Chamber of Commerce.

According to a news report, the new store on 325 Mason Avenue showcases the owner's eye for design.

“I am proud to be celebrating my tenth year in Cape Charles retail and 18th year in business by officially christening our new store at 325 Mason Avenue," said the store owner, Meredith Lusk, as per the report.

Meredith Lusk, the report states, is an Eastern Shore native and entrepreneur, She chose the new location in 2020, and architect Wayne Anderson helped with transforming the place.

Robert Sabbatini, Executive Director of the Eastern Shore of Virginia Chamber of Commerce, said in the report, “Meredith and her team at Moonrise Jewelry are an excellent example of the perseverance and determination of the small businesses here on the Eastern Shore.”