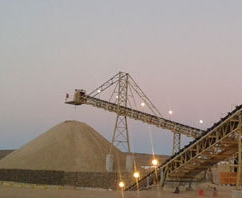 Windhoek, Namibia—Namdeb Diamond Corporation, a 50/50 joint venture between De Beers Group and the Government of the Republic of Namibia, announced the approval of a new long-term business plan that will extend the current life of mine for Namibia’s land-based operations as far as 2042. Image: Sendelingsdrif Mine in Namibia's Orange River mining area.

The land-based Namdeb operations were to close at the end of 2022 due to unsustainable economics. But the Namdeb management team and the Government of the Republic of Namibia have created a mutually beneficial new business plan that extends the life of mine by up to 20 years, delivering positive outcomes for the Namibian economy and Namdeb business, employees, community partners, and the wider diamond industry.

As part of the plan, the Namibian government has offered Namdeb royalty relief from 2021 to 2025, with the royalty rate during this period reducing from 10% to 5%. This has in turn underpinned an economically sustainable future for Namdeb via a life-of-mine extension that, through additional taxes, dividends, and royalties, is forecast to generate an additional fiscal contribution for Namibia of approximately N$40 billion and ongoing employment for Namdeb’s existing employees, the creation of 600 additional jobs, ongoing benefits for community partners, and approximately eight million carats of additional high-value production.

De Beers Group CEO Bruce Cleaver said, “This new business plan, forged by Namdeb management and enabled by the willingness of Government to find a solution in the best interest of Namibia, means that Namdeb’s future is now secure and the company is positioned to continue making a significant contribution to the Namibian economy, the socio-economic development of the Oranjemund community, and the lives of Namdeb employees.”

Hon. Tom Alweendo, Minister of Mines and Energy for the Government of the Republic of Namibia, added, “Mining remains the backbone of our economy and is one of the largest employment sectors within our country. Government understood the fundamental impact of what the Namdeb mine closure at the end of 2022 would have had on Namibia. Therefore, it was imperative to safeguard this operation for the benefit of sustaining the life of mine for both the national economy as well as preserving employment for our people and the livelihoods of families that depend on it.”