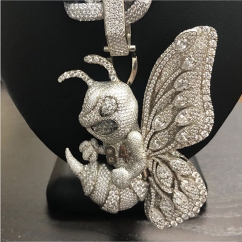 Oakland, CA—When Antonio Brown, wide receiver for the NFL’s Oakland Raiders, wanted to pay tribute to another major sports hero, boxer and activist Muhummad Ali, he decided to say it with diamonds.

Brown, known as AB, turned to Gabriel The Jeweler, an NFL favorite go-to who also made Brown a 6.5 ctw, 1,000-stone diamond pavé goat ring earlier this year. The jeweler also made a $200,000 gold and diamond pendant for Brown, with the names and birthdays of all his children spelled out in diamonds.

Ali, meanwhile was famous for saying his success as a boxer came from the ability to “float like a butterfly, sting like a bee.” Riffing on the saying as well as his own AB initials, Brown had Gabriel The Jeweler create an articulated diamond bee necklace (top of page) estimated to cost about $250,000. (Pocket change for Brown, who negotiated a $50.125 million contract with $30.125 million guaranteed when the Pittsburgh Steelers traded him to the Raiders.) The bee is wearing number 84, just like its owner does on the field. 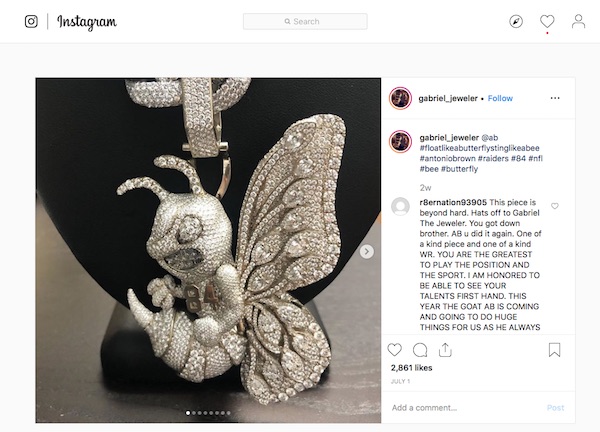 Here are the stats for the piece:

This isn’t Brown’s first tribute to Ali. He reportedly has the boxer immortalized in a mural on the walls of his Pittsburgh house, along with Kimbo Slice, Floyd Mayweather, Jerry Rice, LeBron James, and Randy Moss. 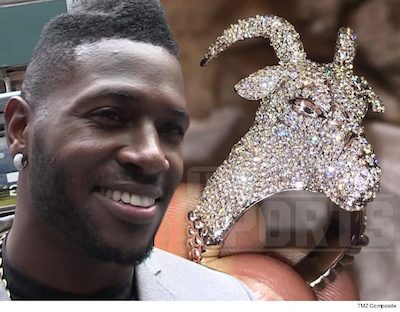 Gabriel The Jeweler also made this diamond goat ring for Brown. Image: TMZ