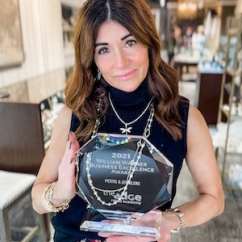 Related: The Spirit Of G. Thrapp Jewelers Lives On In Petite G. Jewelers

Friedman was a longtime employee and protégé of Gary Thrapp, owner of the former G. Thrapp Jewelers in Indianapolis’s historic Meridian Kessler and Butler Tarkington neighborhoods. Thrapp was instrumental in the urban revival of his once-rundown neighborhood into a hip, chic shopping district.

Friedman served as G. Thrapp’s chief buyer and bought the business from him when he retired. She remodeled and rebranded, launching Petite G. on March 1, 2016.

“How do I put a value on Gary’s name, his store, his brand? Since I’m not a family member, I decided not to take on his platform. Besides, in my heart, I wanted a smaller boutique than G. Thrapp,” she told The Centurion at the time the store opened. Petite G. pays homage to its G. Thrapp roots but has forged its own identity as a more contemporary and feminine boutique.

David Brown, ERA president, commented, “Dana diligently embraced strategies and recommendations from her Edge Retail Academy Business Advisor that allowed her to increase sales by 31%, raise gross profit by 40% and even increase her gross margin by 3.3%.”

Friedman noted, “In addition to sharpening our inventory mix and creative store events, Charleen provided us with sales team development and training, which led to an engaged team, and helped grow our revenue significantly.”

The William (Wag) Wagner Business Excellence Award, now in its fourth year, is given annually to one retail jeweler that has achieved the most exceptional business growth in the past 12 months. It is named in honor of Wagner, who passed away in September 2018.

“The award has two goals: one, to acknowledge business excellence from independent retailers; and two, to honor the memory of long-serving ERA business advisor William (Wag) Wagner, whose service, loyalty and advice went well beyond the expectations of our clients, his work colleagues, and our company,” said Brown. Wagner (below) passed away in September 2018.

Next article:
The Misconception of Wanting New Retail Doors Plus 5 Ways to Master Current Relationships