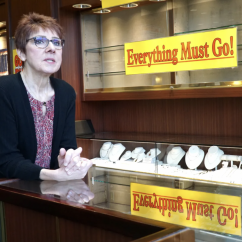 Plymouth, MI--Family-owned Dearborn Jewelers is shutting down permanently after 72 years in business.

According to a news report, the store, located at 805 W. Ann Arbor Trail, will serve its last customers in June, after its owners decided it was time to close the business and retire. They could not find anyone else to take over the ownership.

The decision has stirred many emotions among the store's loyal customers who've shopped there for generations.

"We've had literally hundreds of customers calling, sending emails, stopping in: 'Where are we going to go now? Where do you recommend?"' said Terri Allen, the store owner who's been managing the store with her brother. "We've now had four generations of customers buying from us."

As per the report, Dearborn Jewelers was first opened in 1950 by Allen's father, Nick Pavlichg Sr. In 2003, the shop relocated to downtown Plymouth in the Mayflower Centre. As the business grew, Allen's father thought moving north to Plymouth was a smart move, and so the shop moved to its present location.

The shop is having a sale on its remaining jewelry, offering discounts of as much as 70%.