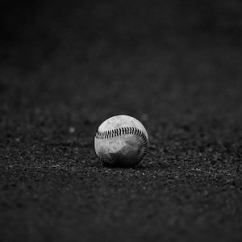 Los Angeles, CA--I love baseball. I love its elements: watching the ball zip back and forth between the players while they’re warming up, seeing it explode out of the pitcher’s hand at impossible speeds, zooming from the mound to the catcher’s mitt like an electron jumping from atom to atom. And even more impossibly, sometimes colliding with the swinging bat and sparking the nine players on the field to leap into motion to try to corral and return it as swiftly as possible. How fitting that the beautiful game of baseball is played on…a diamond.

The gemology of baseball continues: A diamond is the hardest mineral in the world. Hitting a round ball with a round bat is the hardest task in sports, as the point of contact between the two is minuscule. As hard as it is, these guys are really good at it, and over nine innings, somebody’s going to get on base. If only a few do, then the pitcher threw a real “gem.” The quest for flawlessness: The best defensive player in the league is awarded the Platinum Glove, while the best at each position must settle for the measly Gold. The crowd, both in person and at home, vibrates with excitement the closer a pitcher gets to throwing a no-hitter. Out of over 235,000 Major League Baseball games played, there have been 317 no-hitters. Rarer still is the perfect game: when not a single batter reaches first base. There have only been 23 of those. The iconic ballparks are defined by their inclusions – Fenway Park with its Green Monster, a shallow but high wall in left field, and Wrigley Field in Chicago with its unusual ivy-covered fence.

Often while running or during a particularly strenuous Peloton workout, I find that to distract from the pain of pedaling a bike to nowhere my mind drifts to the treasure chest of baseball memories from my own illustrious career that spanned from tee-ball through high school. I’m not saying that if I hadn’t pulled my hamstring I’d be in the big leagues – but it is both true that I did pull my hamstring, and that I am not a major league baseball player. While my athletic star has already streaked across the sky and burned out, along the way I mined some precious stones that I still like to take out and gaze at fondly from time to time: playing catch with my dad and hitting him right in the glove ten times in a row and him saying with bright wide eyes, “I think you might be a pitcher!” I remember with some consternation during a Little League game when the ball bounced before the plate and I swung anyway, hit a home run, and the umpire claimed it didn’t count because the ball bounced. And my crown jewel: my junior year, during which I slumped massively (curveballs are hard), my coach put me into pitch after our team came back from six runs down to tie it in the top of the final inning. I promptly walked the bases loaded, nearly blowing the miraculous comeback for the seniors’ last game of the season. I stepped off the mound and looked at the infielders one by one, holding back tears while trying to apologize with my eyes. Then I took a deep breath and struck out the next three batters in a row. “How did you do that?” our third baseman asked. “I don’t know,” I said. I know they’re supposed to be fun, but sports can be terrifying. That terror is what makes those moments when you can withstand the pressure and be the reason your team wins so precious.

The players who matriculate to the MLB and play there for all of us to enjoy have all survived and thrived under immense pressure. They are a superstitious bunch – in a game so consistently defined by failure, they cannot thank or blame themselves when things go either well or awry. So, they outsource some of the agency to the baseball gods, who can be appeased by talismans. Unlike other professional sports, Major League Baseball players are permitted to wear jewelry, including diamonds, on the field. What does the jewelry they choose to wear say about who they are as players and people? 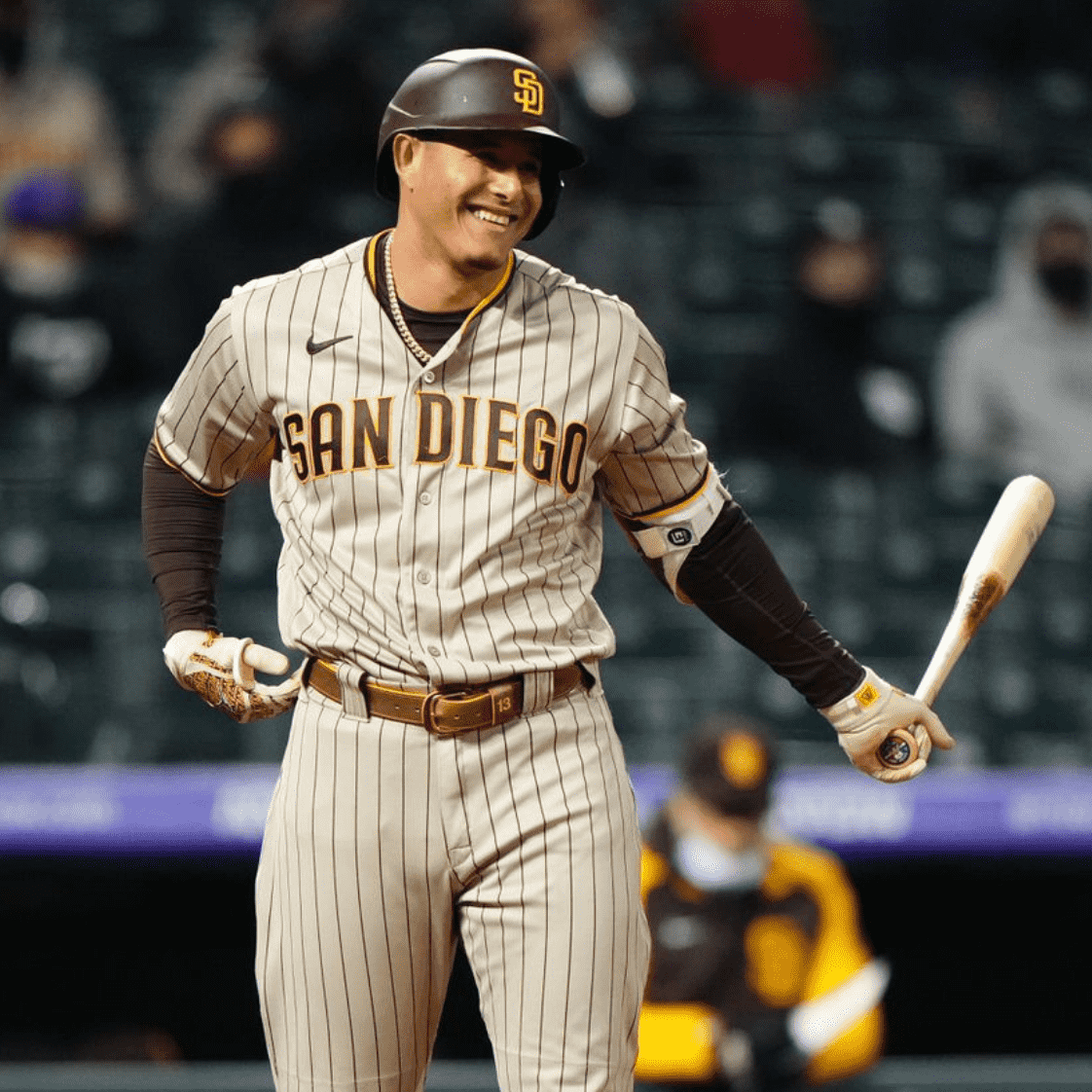 Manny Machado is the 30-year-old third baseman for the San Diego Padres, who, played a close game against the Philadelphia Phillies to be one step closer for the 2022 World Series trophy; the Phillies taking the win with Bryce Harper’s home run. When Manny first joined the league, he was bedazzled in a unique chain of strung together globes encrusted in  diamonds. His necklace was a bit too long, too light, and a bit flashier than it was useful; a criticism that dogged Machado during his early seasons in the league. Since then, he has matured and has become a defensive rock at third while continuing to improve his offensive output. This maturation is reflected in his neck bling, as he has swapped in a heavy diamond encrusted Miami Cuban link chain that rests comfortably on his jersey while he plucks 120 mph line drives out of the air. 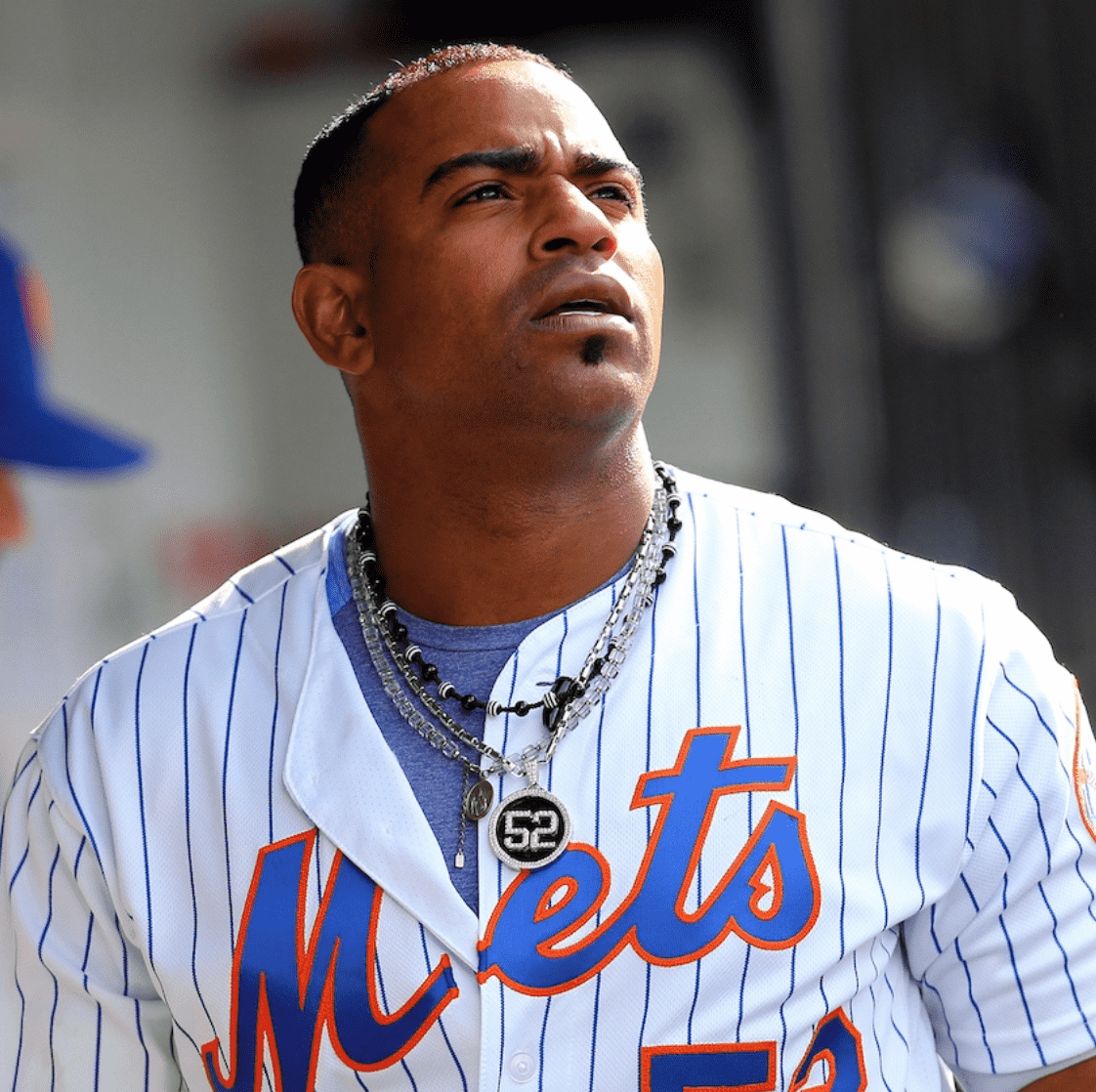 Yoenis Cespedes is a shockingly talented Cuban born left fielder who spent five seasons with the New York Mets, helping propel them to their 2015 World Series appearance with his cannon arm and power hitting. On the field, Cespedes wore a rotation of unique chains including one with a giant 52 pendant (his jersey number) fully encrusted in natural diamonds. A separate chain composed of diamond encrusted links infamously broke apart during a slide into second base, scattering diamonds across the infield. As were his diamonds that day, Cespedes is a bit all over the place – while recovering from reparative heel surgery, he dodged a wild boar charging him at his Florida ranch but stepped into a hole and fractured his ankle. He hasn’t played in the MLB since 2020 but hopefully, as his teammate gathered up the diamonds from the infield, Yoenis can pick up the pieces and return next season. 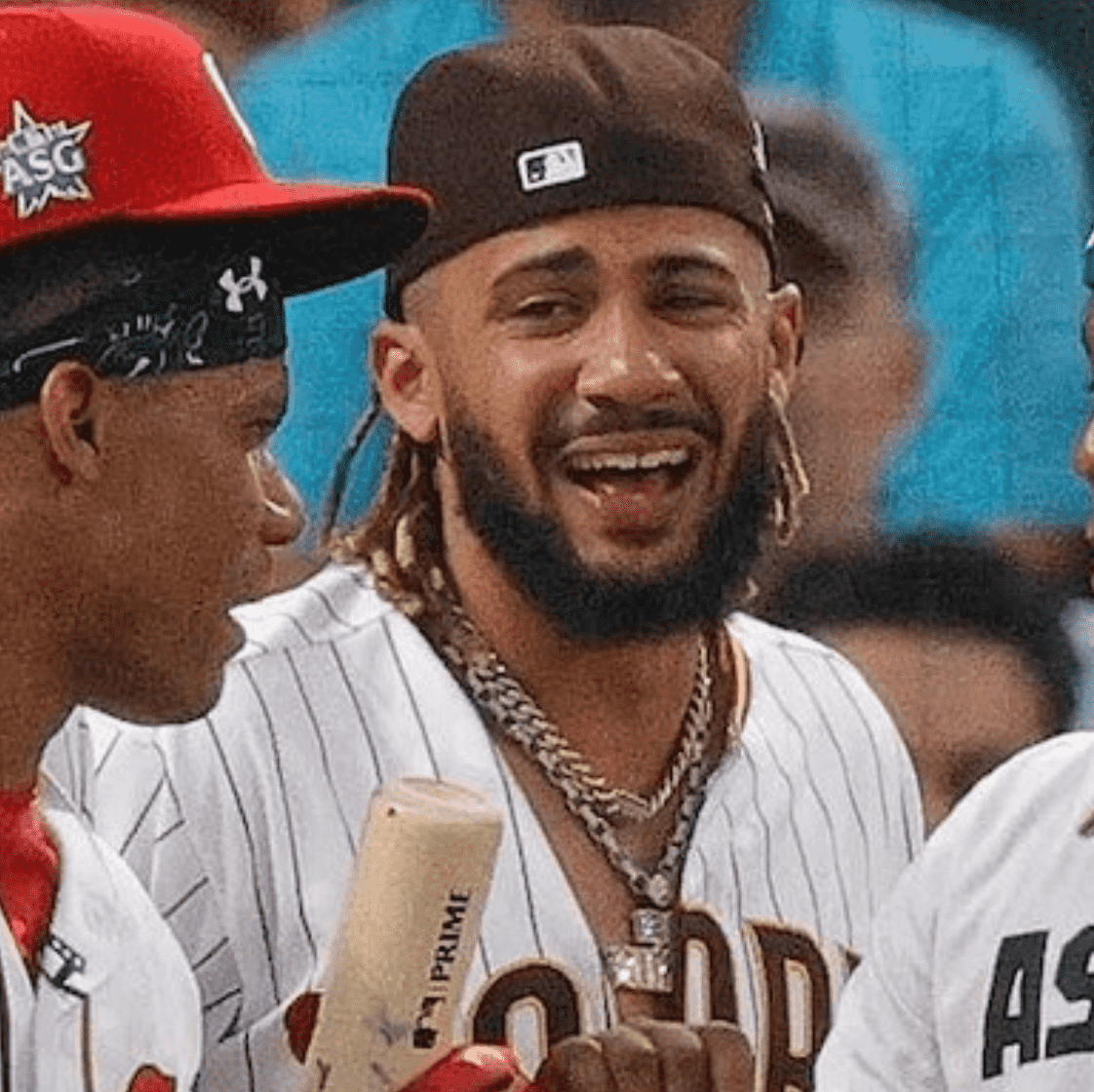 Fernando Tatis Jr. moves on the field like my cat chasing a moth through my living room. I hope that doesn’t sound diminutive, because watching my cat hunt a moth is awe inspiring. Nicknamed “El Niño,” Tatis Jr. is an acrobat, pulling off impossible leaping catches, tagging runners out while descending into full splits, and dodging tags of flabbergasted opponents who simply never imagined a human being to be capable of such contortions. Similarly hard to believe is the pendant he wore during the 2021 All-Star week: a hermes chain decked out in 75 carats of diamonds crowned by the face of a baby atop the words “El Nino,” a combo encrusted in 25 more carats of diamonds. It was as fun to see him wearing it as it is to watch him play; he plays with the spirit of a gleeful young boy. 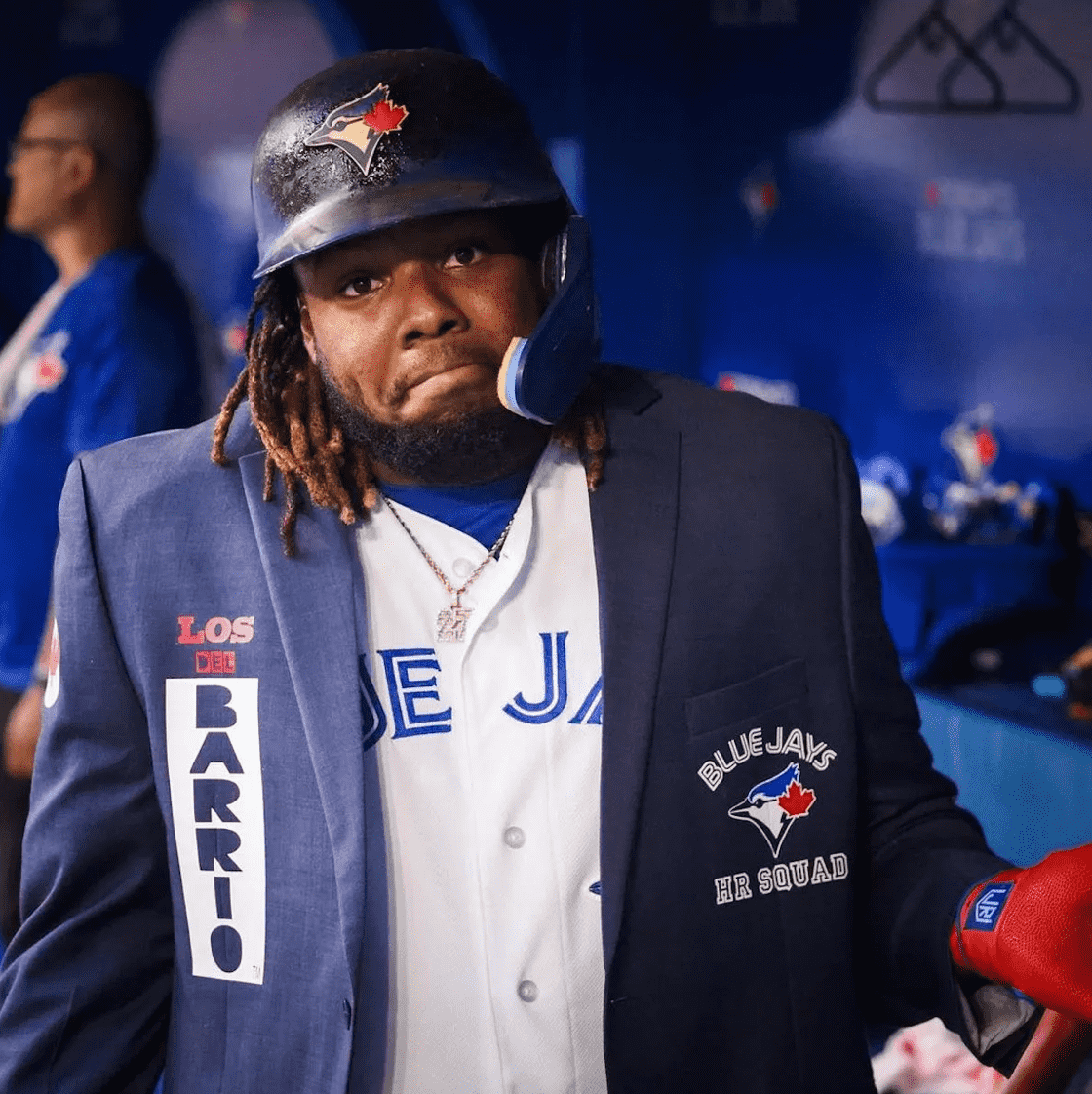 Vladimir Guerrero Jr. or “Vladdy” is a slugger and first baseman for the Toronto Blue Jays with a big jolly smile and an even bigger black diamond pendant in a high concept configuration of his jersey number 27. Vladdy is a defensive wall at first base and has come through time and again in clutch offensive moments to keep games alive for his team: the same way he is keeping the game alive for the next generation with his VG27 foundation, a nonprofit organization that aims to support vulnerable children and their families through education and sport. Every player adds to the legend of the number they wear; Vladdy goes the extra mile to make sure what he represents makes a tangible difference in people’s lives. 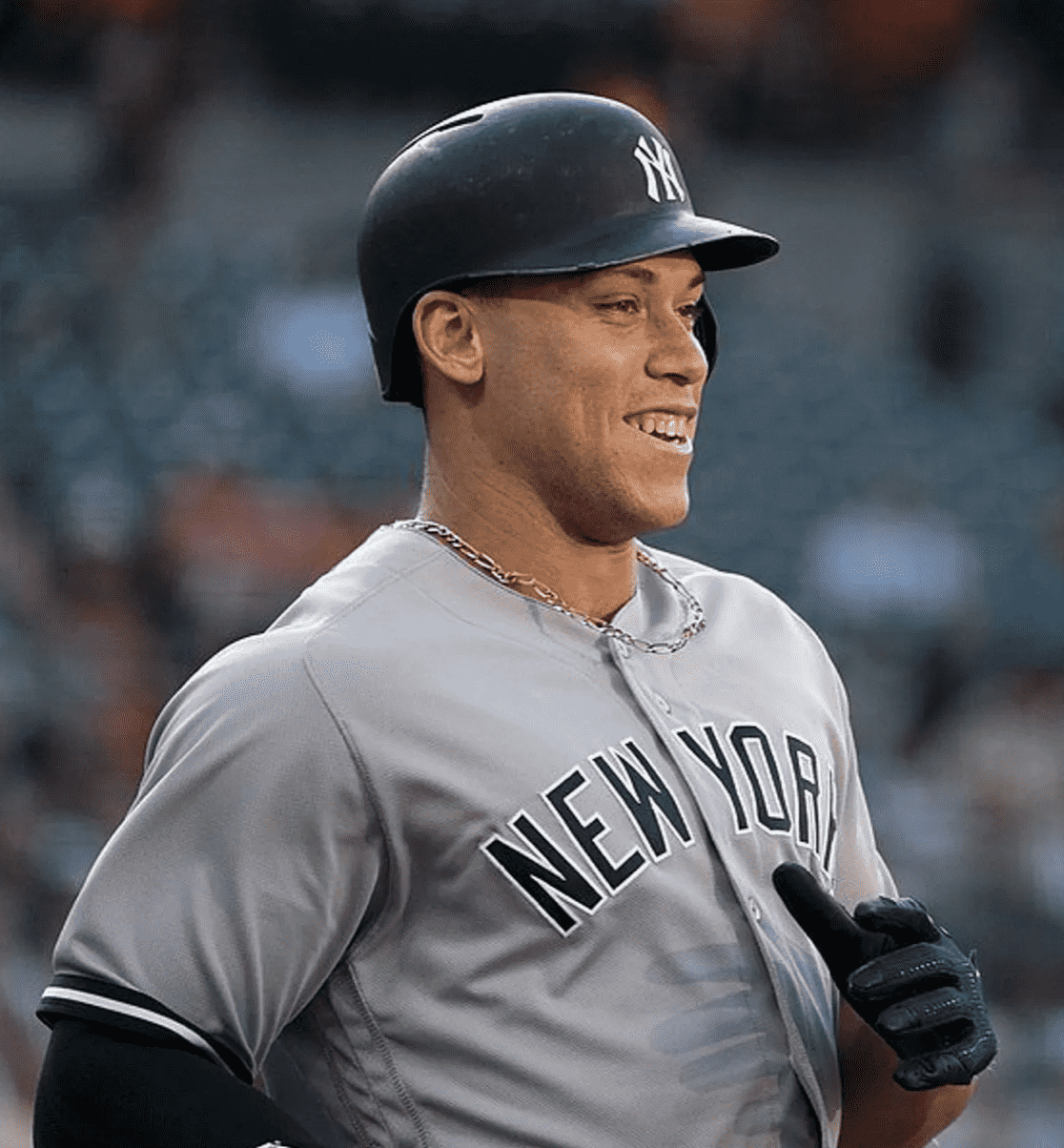 Aaron Judge of the New York Yankees can’t help but be flashy, as he is both an oak tree of a man and a devoted apostle of the church of absolutely smashing baseballs into orbit. He is notoriously shy of the spotlight, which was shining on him most intensely this past season as he chased the regular season home run record set by Roger Maris back in 1961. Aaron wears a classic Figaro link silver chain, which gives him stability and simply presents the player himself as a shiny object to behold. Aaron, now that you’ve etched your name onto the list of all time greats, maybe it’s time to add something shinier around that neck? 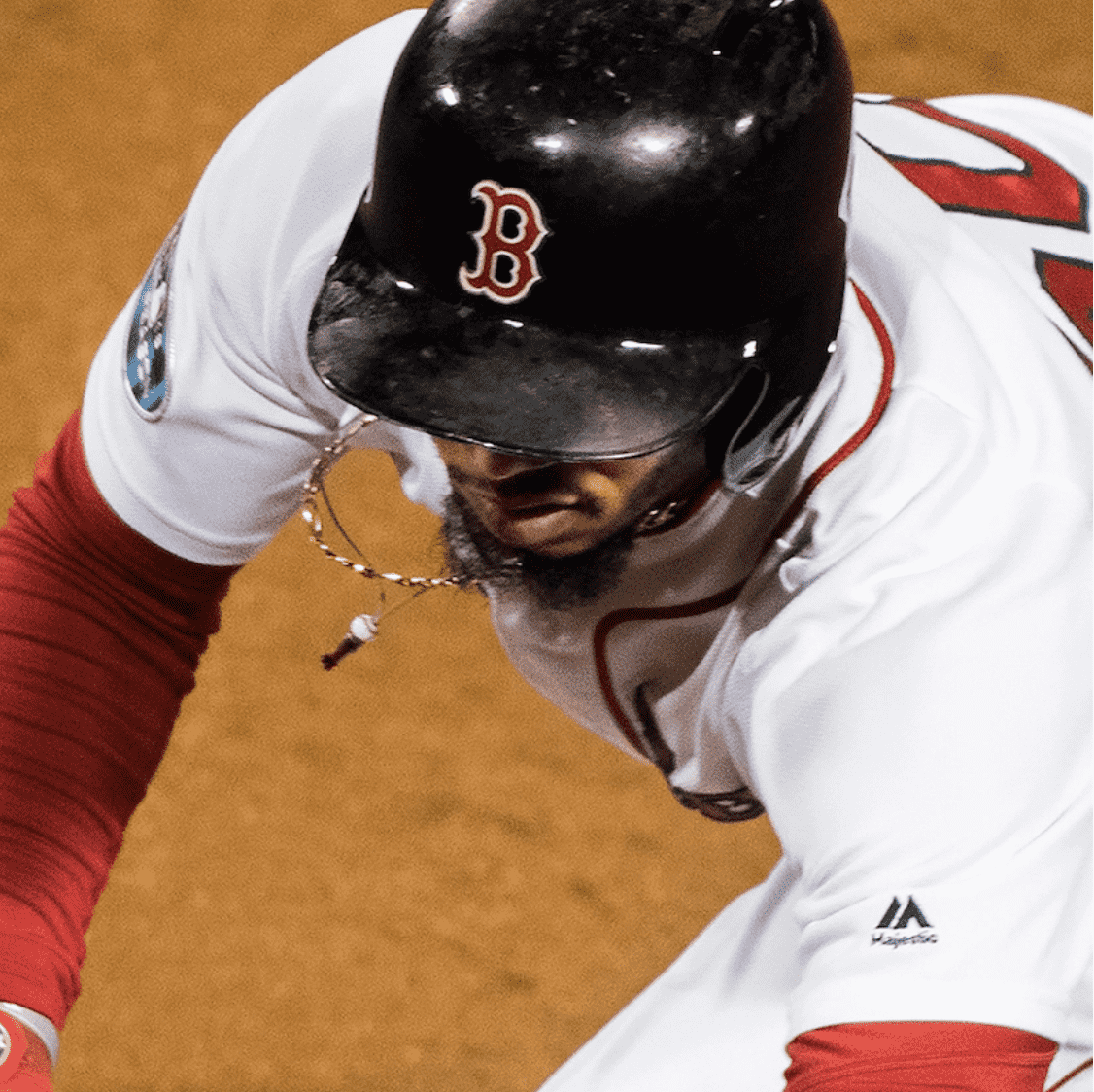 Mookie Betts currently plays for the Los Angeles Dodgers. Mookie was drafted out of high school to the Red Sox organization and has blossomed into a full blown superstar. Mookie wears a heavy gold Figaro link chain. Heavier is better because the weight prevents the chain from flying around too much and interfering with Mookie while he smashes doubles and home runs, steals bases, and robs his opponents of hits with his stellar outfield defense. But Mookie didn’t stop at just the chain: back when he was with the Red Sox, a young fan gifted him an acrylic pendant of a bat and a ball. Okay, obviously this is no diamond, and can be yours for the low price of $11.97 – but it does house supernatural lucky charm powers, or at least Mookie thinks it does, which is powerful enough.

This article was originally published on Natural Diamonds and has been republished with permission. Read the original article.