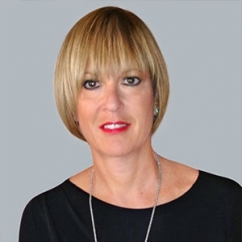 Boston, MA--Less than a month after resigning from Russian mining company, Alrosa, as its North America president, Rebecca Foerster has landed at another diamond company.

The jewelry industry veteran was named the North American president of Hearts On Fire. In a statement issued Tuesday by the international diamond jewelry company, the appointment comes at a time when it is embarking on a brand renewal program with plans to invest and accelerate growth in key global markets, including North America.

It is the first rebranding effort by Heart on Fire since it was acquired by Hong Kong-based jewelry retail giant Chow Tai Fook Jewellery Group Limited in 2014. The business in the U.S. is being rebranded from Chow Tai Fook North America (CTFNA) to Hearts On Fire NA and Foerster will be leading this effort.

Forester’s appointment becomes effective, May 1. She will manage Hearts On Fire’s U.S. representative office in Boston with responsibility for all North American regional operations. She is replacing Caryl Capeci, who is stepping down from her role as CEO of CTFNA, according to the statement.

Foerster brings a wealth of experience to the new role, with deep knowledge of the U.S. jewelry market, and proven merchandising, marketing and operational skills gained over 20 years in cosmetics and global branding. In addition to her prior position as president of Alrosa USA, Foerster held senior roles with Rio Tinto Diamonds, Frederick Goldman and Leo Schachter Diamonds.

“Rebecca Foerster brings with her an in-depth understanding of marketing in the U.S. jewelry business, and will be invaluable in continuing to build upon Hearts On Fire’s business success while driving a competitive advantage for our retail partners,” said Rita Maltez, global president of Hearts On Fire.

Foerster added, “I am delighted to join Hearts On Fire in the U.S., particularly at this time when the brand is undergoing a renewal and poised for growth. I look forward to working closely with our retail partners on Hearts On Fire’s exciting next chapter.”

Capeci, a longtime executive at Hearts on Fire, has held the top job at CTFNA since 2019. During her time with the company, Capeci was instrumental in developing Hearts On Fire into a leading player in the North American market. “It has been a pleasure working with Caryl. All of us at Hearts On Fire thank Caryl for her dedication, passion, and professionalism and wish her all the best for the future,” Maltez said.

Founded in 1996, Hearts On Fire, with its motto, “The World’s Most Perfectly Cut Diamond,” is known for its diamond cutting expertise. The brand’s diamond jewelry is available in approximately 800 locations in 26 countries.