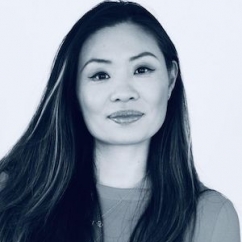 New York, NY—Jewelry designer Alexandra “Alex” Woo (image), whose jewelry became a household name among fashionistas after it was featured on several popular TV shows, died of cancer at her home on March 30. She was 47.

The daughter of a bench jeweler, Woo was always drawn to jewelry and made her first piece, a silver and brass pendant, as an eight-year-old child. She cut the metal and machine polished it at only eight years old. After graduating from Cornell University, she studied jewelry at Parsons School of Design, and from there it became her career.

Woo launched her eponymous jewelry brand in 2001. Thanks to press exposure, her brand was already well known to consumers when she was tapped to exhibit at the JCK Rising Stars pavilion in Las Vegas in 2006.

Woo’s “Little Icons” collection helped to kick off the trend for personalized jewelry. She designed the yellow gold “C” necklace worn by Carrie Bradshaw in The Carrie Diaries(the prequel to Sex and The City). Multiple characters in the TV series adaptation of Gossip Girl also wore her jewelry on set, including the signature “BW” initial necklace worn by lead character Blair Waldorf (played by Leighton Meester).

An obituary in WWD says Woo also produced all the jewelry for Major League Baseball, was named one of Crain’s New York Business magazine’s “40 under 40” and that she counted many fashion editors, influencers and celebrities among her customers.

Eva Longoria and Christina Applegate were among her celebrity fans. Woo and Applegate co-designed a special pendant to raise funds for the nonprofit breast cancer education foundation that Applegate founded. Woo also created a line called “Little Activist,” benefiting such causes as wildlife and honeybee preservation, and a separate line called “Mini X Words” to represent female empowerment and self-love.

The brand will continue, said a company spokesperson. From her company website:

Alexandra was a doting mother, wife, daughter, and businesswoman, and her impact on the jewelry industry will never be forgotten. Over an illustrious twenty years, she told countless stories through her designs, and they quickly became an extension of who she was. Always smiling and in good spirits, she enjoyed being able to share and take part in women’s lives and loved strengthening special moments and experiences through her jewelry.

Thank you for the outpouring of love and support during this time. Although we are filled with grief, there is comfort in knowing her extraordinary legacy and story will continue to be written through her designs. We greatly appreciate your patience as we adjust to a new reality. Alex was talented, vibrant, and remarkable in
so many ways and will be deeply missed.

Woo is survived by her husband, Ed Huang, a son, Alexander, and canine companion Teddy.