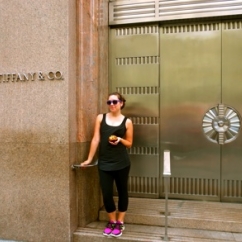 New York, NY—Worldwide sales at Tiffany & Co. declined 3% net in the first quarter, and same-store sales dipped 2%, which CEO Alessandro Bogliolo attributed to a global decline in tourism. Trade tensions between the United States and China played a significant role—tariffs on jewelry sent to China rose 25%—but tourism has been down for a year, impacting the retailer’s sales. Net sales in the Americas declined 4% and same-store sales 5% year-on-year, noted CFO Mark J. Erceg during the company’s earnings call Tuesday morning. Most other regions also noted declines as well.

By product, however, the brand’s fashion lines like “T” and “Paper Flowers” rose slightly, but engagement jewelry and sales from the brand’s heritage designer lines (Elsa Peretti, Paloma Picasso, Schlumberger) also were down.

Kirkland, WA--It's no secret that Costco is a player (albeit minor) in the luxury jewelry space online. Its website has for years featured--and sold--a few marquee pieces of diamond jewelry in the six-figure range, and the retailer sits in the luxury space in general in the whole warehouse club category.

So it shouldn't be a huge surprise that a big diamond sale pushed its quarterly jewelry numbers into the stratosphere. The ring, discussed in some detail here, is a 10.3 carat, I VS1,cut grade excellent, in a six-prong platinum Tiffany style setting. It's listed online for $419,999.99. The listing does say it's the only one; Costco aficionados also will recognize the .99 pricing--a clue that it's a limited offering to snap up while it lasts. 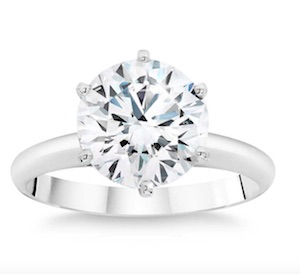 The ring itself might be a one-off, but those who missed out can still find more than a few choices of luxury diamond and gemstone rings to choose from, as evidenced by just a short glimpse at Costco's fine jewelry page. 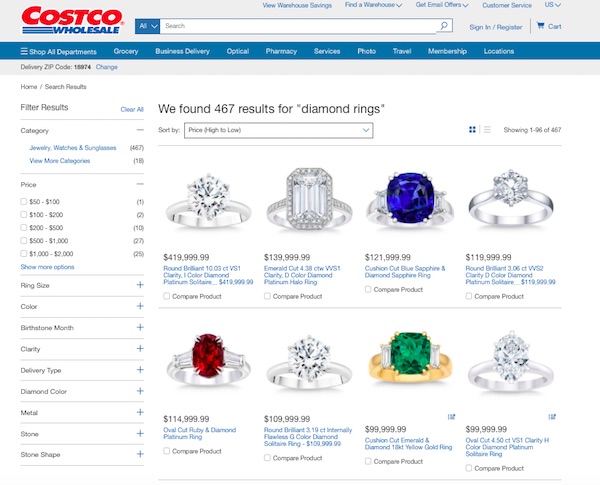 Meanwhile, when UBS equity analyst Michael Lasser asked Costco CFO Richard Galanti how they're going to beat that next quarter, he quipped, "you have an anniversary coming up, don't you?" Just the answer one would expect from any good luxury jeweler--except sizing this baby is on the customer's own dime.

Next article:
Retail Report: Great Posting Ideas From Your Peers