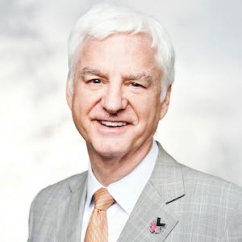 New York, NY—Jewelers of America (JA) and the GEM Awards Committee have announced that Stephen Lussier will be the recipient of the GEM Award for Lifetime Achievement at the 20th annual GEM Awards, set for Friday, January 14, 2022, at Cipriani 42nd Street in New York City.

Lussier is chairman of De Beers Jewellers and De Beers Forevermark as well as executive vice president, Brands & Consumer Markets, De Beers Group, and a member of De Beers Group’s Executive Committee. He also is the current Chairman of the Natural Diamond Council and a board director of the Responsible Jewellery Council. He joined De Beers in 1985 and for over 40 years has been at the heart of De Beers and diamond marketing worldwide: In 1995 he was appointed a DTC (Diamond Trading Company) director and joined the DTC executive committee in 2002. In 2005 he was appointed to De Beers Group’s Executive Committee with responsibility for External and Corporate Affairs; in 2009 he took on the role of CEO of Forevermark and executive vice president of marketing for De Beers Group.

In April 2019, Lussier stepped away from his role as CEO of Forevermark to increase his focus on shaping De Beers Group’s strategy at the consumer level in his role as executive vice-president of Brands & Consumer Markets, with accountability for all De Beers downstream activities.

The GEM Awards gala honors the outstanding achievements of individuals or companies whose work raises the visibility and status of fine jewelry and watches. Lussier was selected by the GEM Awards Committee to receive this prestigious 2022 GEM Award for Lifetime Achievement for his dedication to the diamond and jewelry industry over the course of his tenure. His achievements and accolades exemplify the defining characteristics of a GEM Award for Lifetime Achievement recipient.

”It is truly a pleasure to be able to celebrate the achievements of Stephen Lussier with a GEM Award for Lifetime Achievement. Stephen has done so much for the diamond business and, in turn, for the jewelry industry as a whole. We look forward to bringing the industry together in total celebration this January as we honor Stephen" says JA president and CEO David J. Bonaparte.

In addition to the GEM Award for Lifetime Achievement, Jewelers of America will be announcing the other GEM Award categories and nominees in the coming weeks. For details on the 20th annual GEM Awards, to purchase tickets or to or to show support for Lussier through sponsorships and the GEM Awards Journal, visit www.jewelers.org/gemawards.