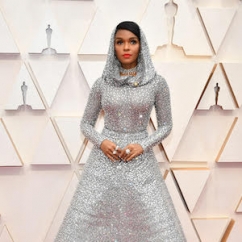 Hollywood, CA—The 2020 awards season came to its crescendo Sunday night with the 92nd Annual Academy Awards event, aka the Oscars. By now, of course, everyone knows that the Korean film Parasite was both a surprise upset win and a groundbreaking first foreign film to take away the award for Best Picture.

There was the usual round of read-into-it-what-you-will social commentaries reflected in the dress of the stars, but the best news was that the return of major jewelry we observed in earlier awards shows continued in a major way on Sunday night.

Fashion-wise, the prevalence of pink and/or a host of armor-like metallic dresses gave a nod to women’s empowerment and the ongoing push for greater equality in Hollywood. While many women-directed movies were up for various awards this year, none of the female directors themselves were nominated. Actress Natalie Portman made a statement about that by having the women’s names embroidered in gold on a cape she wore over her gold gown, while Monáe (above left) wore one of the night’s most show-stopping ensembles: a Ralph Lauren beaded metallic hooded gown, a kind of Handmaid’s-Tale-meets-Marvel-superhero mashup of female empowerment and modesty.

Gender-bending fashion is no longer news, nor is glittering jewelry for men. Last year, Billy Porter’s tuxedo gown was the buzz of the ball, but this year his shimmering orange and gold gown was just another gorgeous gown on the red carpet. 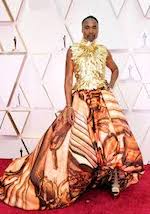 Bigger Billie buzz went to teenage singer and Grammy sensation Billie Eilish, who wore a man-sized Chanel suit (in keeping with her usual androgynous style), accented with jet-black talon fingernails and bi-color black and chartreuse hair. Both she and Porter wore heaps of jewelry: hers, Chanel (of course) and his, Swarovski Atelier bracelets. 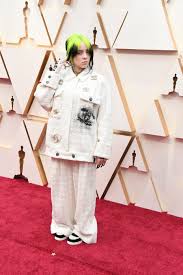 Meanwhile, actor Timothée Chalamet, a rising star for both his onscreen performances and his edgy choices of red-carpet attire, wore a Prada tracksuit accented with a Cartier diamond and ruby “Tradition” brooch (Image, PopSugar): 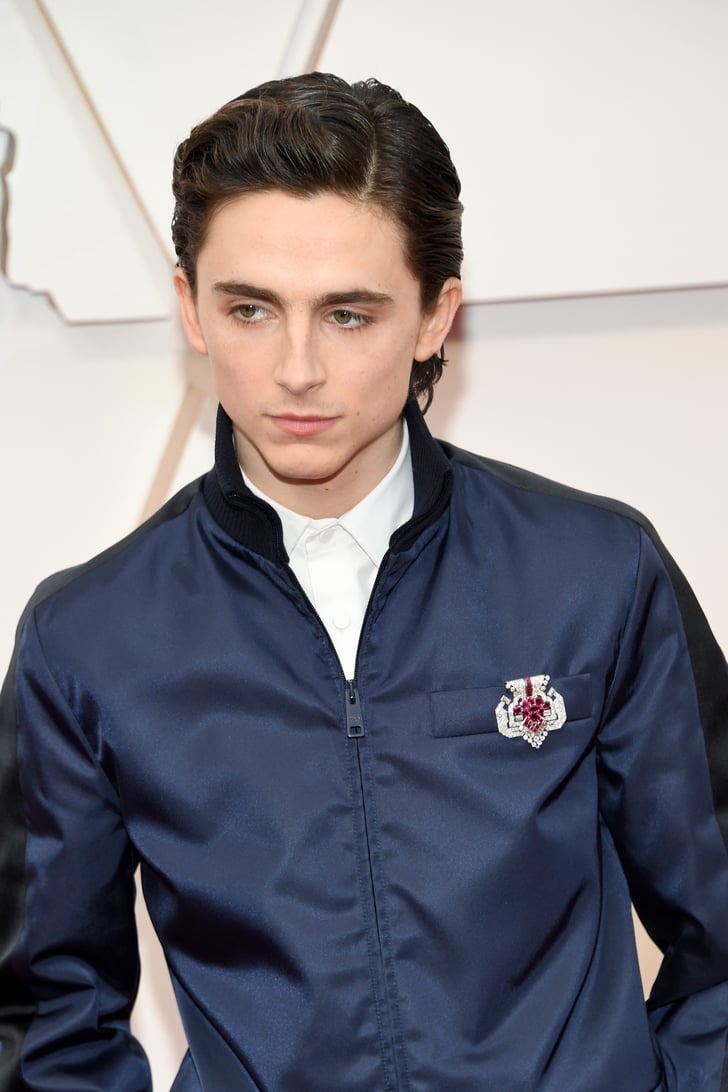 Hair jewelry made news again, whether it was Rebel Wilson’s elegant barrette, Saiorse Ronan’s Gucci diamond and emerald winged fly hair clip, or the magnificent Boucheron high jewelry headpiece, earclips, and bracelet ensemble worn by Salma Hayek (aka Mrs. François Henri Pinault). Since her husband is the founder and head of Kering, the luxury conglomerate that owns Boucheron (along with Pomellato and a host of other luxury fashion and jewelry brands) the entire company is her jewelry box. We expected nothing less. 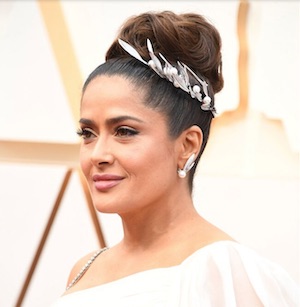 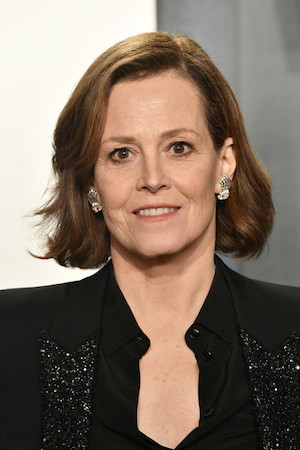 But you don’t have to be dressed by a stylist or married to a luxury tycoon to pull off a red-carpet look: plenty of regular jewelry-store brands were represented as well. Who wore what:

Weaver’s look featured platinum jewelry from Kwiat and Fred Leighton: her Kwiat earrings with pear shaped diamonds (12 carats each), and two estate pieces from Fred Leighton: a Cartier Art Deco bracelet with emeralds and diamonds and a 1930’s Bombe-shaped ring with diamonds by Rene Boivin. 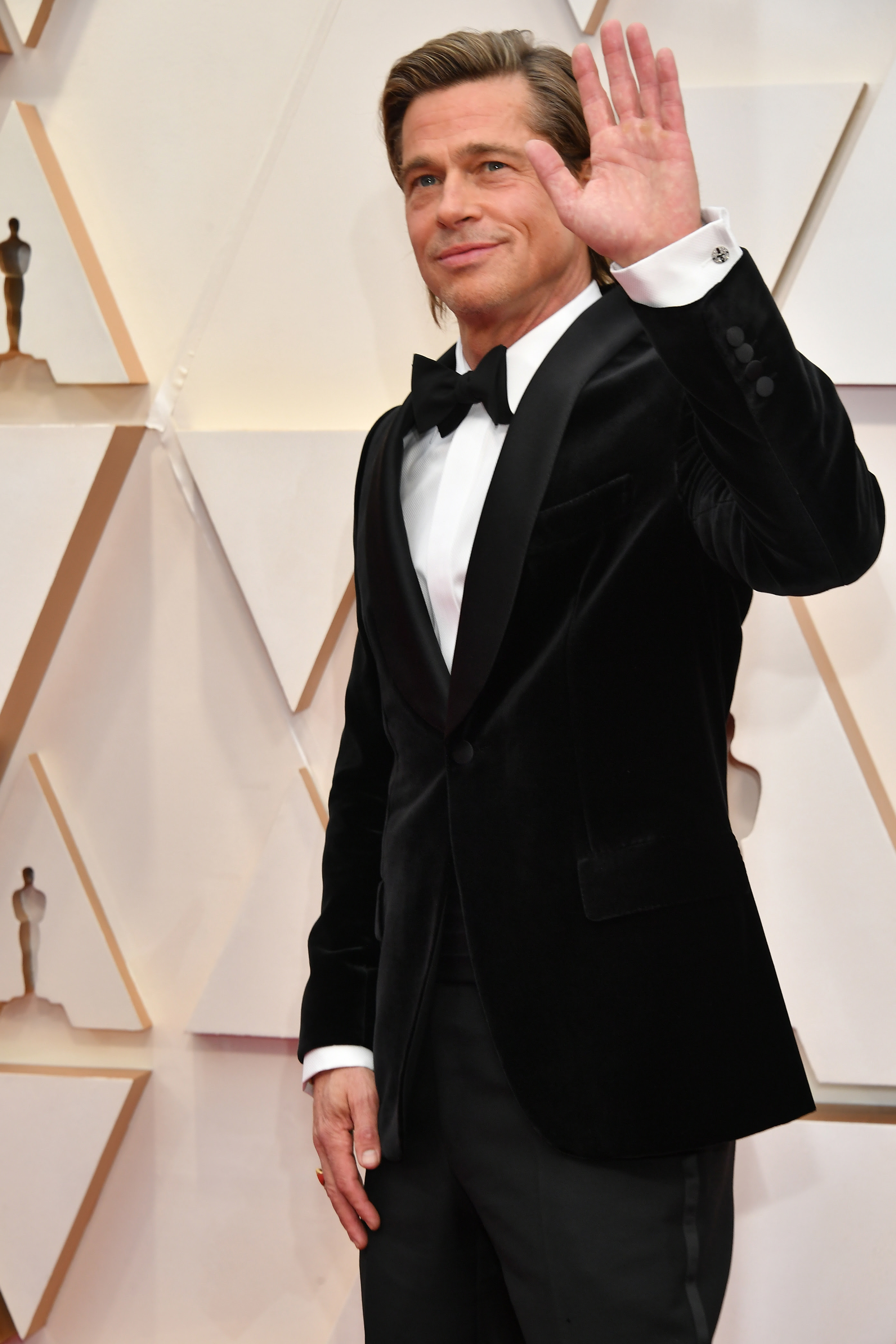 Harry Kotlar diamonds made an appearance at the Oscars as well. Model Jasmine Tookes wore a massive diamond ring, while Adriana Lima wore Harry Kotlar diamond chandelier earrings to the Vanity Fair Oscar Party, an invitation as coveted as the awards themselves. 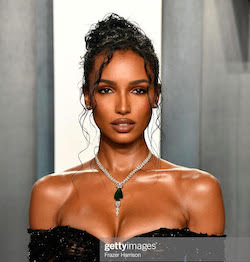 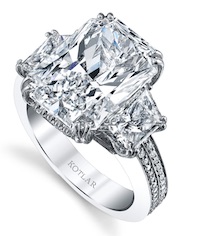 Jasmine Tookes, above, and Adriana Lima, below, in Harry Kotlar. 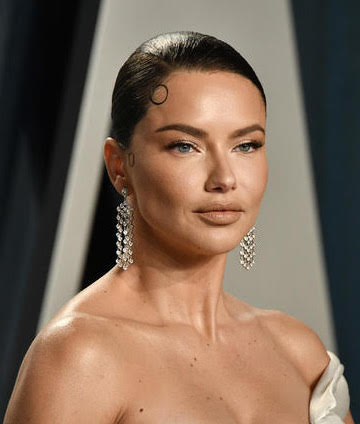 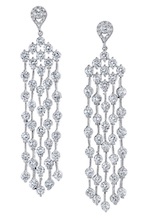 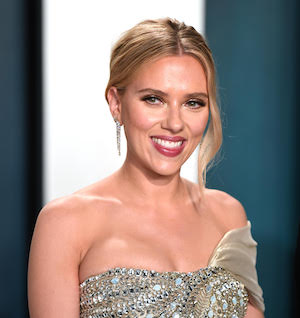 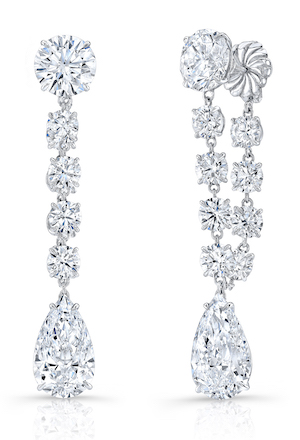 Ko, a jewelry designer who’s a darling among the fashion crowd, talked about how the Forevermark collaboration came about, and why she decided to partner on these particular pieces. “Forevermark approached me about designing some special pieces for the Oscars red carpet using diamonds from their Exceptional collection, and I was honored to take my signature design aesthetic and transform these rare, natural treasures into red-carpet worthy masterpieces. I’ve always admired Forevermark for the incredible quality of their diamonds, and I love that their diamonds are sourced responsibly and give back,” she said.

“I’m always initially inspired by the raw materials and how I can bring movement and light to the piece I am designing,” she continued. “As soon as I laid eyes on the two pear-shaped Forevermark Exceptional Diamonds, I knew the silhouette of my Olivia earrings was the perfect design to highlight the beauty of these on-of-a-kind stones.”

Not to be outdone (monetarily, at least) Reese Witherspoon (Judy) wore $1.8 million worth of Forevermark jewelry to the Vanity Fair Oscar party; a total of 68.41 carats in Forevermark by Rahaminov Asscher diamond drop earrings (36.10 ctw) and diamond line bracelet (27.02 ctw) both in platinum, and a Forevermark Journeydiamond ring set in 18k white gold (5.29 ctw). 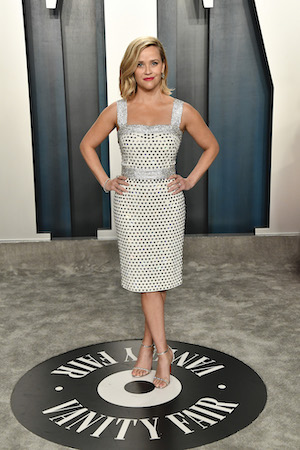 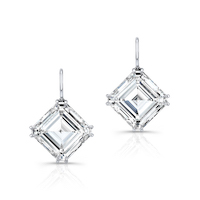 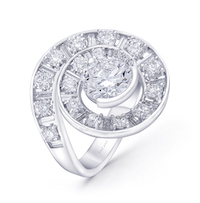 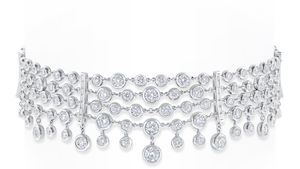 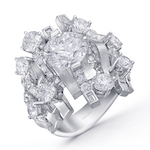 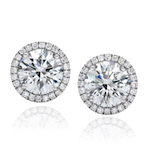 Finally, actress Chrissy Metz (This Is Us) attended the Oscars in Forevermark Frozen Beauty diamond earrings (14.87 ctw) and Cipher diamond ring (10.79 ctw), both in white gold. 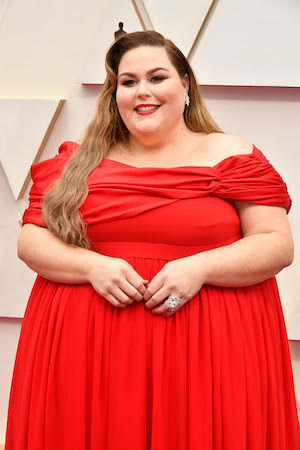 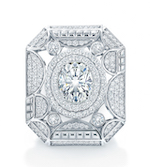 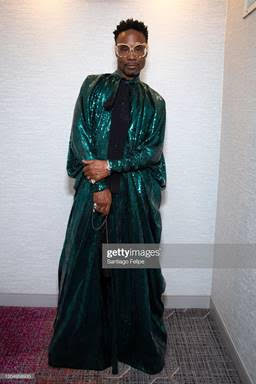