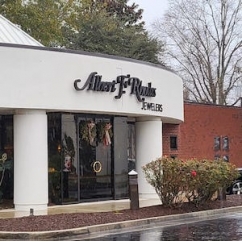 Wilmington, NC—After more than 70 years in business, Albert F. Rhodes Jewelers is closing its doors at the end of the week. The upscale jewelry store was founded as a watch repair shop in 1948, operating out of a hotel office. Founder Albert Rhodes gradually added watches and clocks for sale, and then branched out into jewelry.

According to the Star News Online, Wayne Rhodes, who along with his sister Betsy Rhodes Herring took over the business from their father in 1989, said they plan to retire and there are no immediate plans for the future of the property or business.

It’s a common refrain in the industry. "It's been a great run, but it was just time to retire," Rhodes told the paper. "That made it pretty simple."

“Since announcing their closing, customers from decades past have stopped in to say goodbye and make a final purchase. ‘The reaction has been really sweet,” Rhodes said. “Most of them have been doing their business here for a long time and there’s been a fair amount of emotion, I’ll tell you that.’”

Next article:
Data And Diversity, Two Key Issues, To Be Discussed In Webinars This Thursday