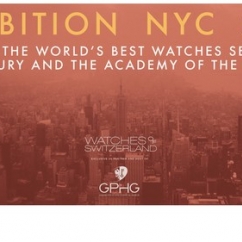 New York, NY--Watches of Switzerland has formed an exclusive U.S. partnership with the Grand Prix D'Horlogerie de Geneve (GPHG) to exhibit the 2022 GPHG winners, known as the Oscars of the watch industry.

For this partnership, Watches of Switzerland will host the exhibition of all 15 category winners from the 2022 GPHG awards at its New York flagship store in SoHo. This exhibition will be open to the public December 2 through December 4 (appointments are encouraged). This will be the first exhibition of the GPHG 2022 winners following the  award ceremony on November 10.

"Since we first opened our SoHo flagship in 2018, Watches of Switzerland has set out to shift the  paradigm of luxury retail,” said David Hurley, Watches of Switzerland Group  Deputy CEO. “Four years later, we continue to evolve the world of luxury watches  and are honored, in partnership with the GPHG, to offer our clients and the greater New York  watch community the first opportunity to experience this year's height of watchmaking with the  United States' first exhibition of the GPHG winners.’

Founded in 2001, the GPHG is overseen by the Canton and City of Geneva and was created with the purpose of highlighting and awarding the most remarkable contemporary horological creations. With the intention of  promoting the art of watchmaking worldwide, following its annual November award ceremony, GPHG honors the winners with an exhibition that in previous years has been held in Dubai, London,  Moscow, Paris, Singapore, and Vienna.

Next article:
Berkley Asset Protection Encourages Jewelers to Be Vigilant Against Smash-and-Grab Robberies