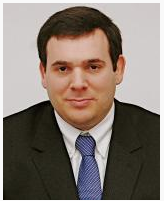 "I am delighted to welcome Ari and Mark to the Board of Directors, and am confident that they will contribute significantly to the WDC's mission," said Eli Izhakoff, president of the World Diamond Council. "They have very large shoes to fill. Both Freddy and Terry were key participants, and headed organizations that have supported WDC right from the very beginning. We wish them well, just as we wish their successors the best of luck as WDC directors."

Epstein also was nominated as vice president of the World Diamond Council. He will serve in the position as did Hanard until his retirement.