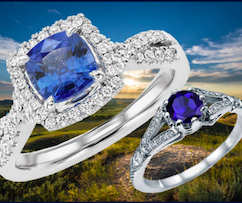 Billings, MT—Montague’s Jewelers, renowned for its collection featuring the state’s native Yogo sapphires, has teamed up with a local clothing boutique, Paris Montana Mercantile, to bring its jewelry to a new audience. Image: Montague's Yogo sapphire jewelry set against a Montana scenic backdrop.

Montague’s is a third-generation family jewelry store specializing in upscale jewelry and especially inspired by the natural splendor and beauty of its home state of Montana. The company has two locations, its flagship jewelry store and its Montague’s Silver boutique, which offers a variety of silver-based product including designer jewelry, silver and turquoise jewelry, and luxury silver giftware from brands such as Reed & Barton.

The flagship store was founded in 1937 when, new to Billings, W.J. “Wally” Montague first opened Montague’s Jewelers. Mere weeks after opening, downtown Billings experienced what has been chronicled as “The Great Flood.” The catastrophic event could have put Montague’s out of business permanently, but the Billings community rallied around the young jeweler couple with a brand new baby, helping them get back on their feet and reopen in September that same year.

In 1963, Wally’s son, Jay, joined the family business carrying on the same community pride and service and, in 2012 Jay’s son, Chris, became the third generation owner.

Today, Montague’s proudly continues the tradition of offering not only fine jewelry and excellent service, but also ethical practices and philanthropic engagement.

The jeweler also is renowned for embracing Montana’s native Yogo Sapphires. Found only in Montana, Yogo Sapphires are renowned for their naturally brilliant blue hue. But with the closing of the Yogo Gulch Mine, the stones have become increasingly rare. Montague’s still boasts a large inventory of the stones, and in addition also carries an extensive selection of other, non-Yogo Montana sapphires in a variety of colors.