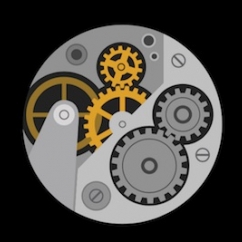 Geneva, Switzerland—It was only a few short years ago that high-end watches were one of the strongest categories in the luxury market. But today, executives of the Swiss watch industry are losing both sleep and sales. According to the Deloitte Swiss Watch Industry Study 2016, exports of fine Swiss watches declined by almost one billion dollars year on year for the first half of 2016. Furthermore, sales have declined steadily by both volume and value for 14 consecutive months.

79% of executives cited decreasing foreign demand as the biggest risk to the Swiss watch industry, but no one single cause was identified as the trigger that started the downward slide. Among many causes, the strength of the Swiss franc since its uncoupling from the Euro in 2015 made all Swiss exports more expensive. Although less of an issue this year because exchange rates have remained fairly stable—and some brands lowered prices to compensate—it still plays into the drop in demand, both abroad and from tourists.

Economic slowdowns in both Hong Kong and China—as well as moves by the Chinese government to trim luxury consumption—are major factors for the decline in Swiss watch exports, along with economic uncertainty in certain parts of Europe and fears of terrorism in the aftermath of attacks in both France and Belgium. 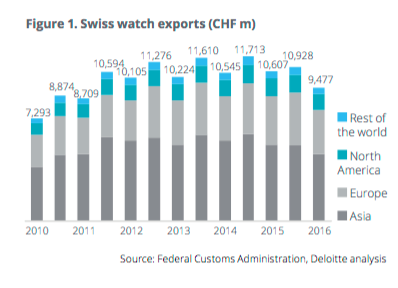 North America remains a bright spot, according to Deloitte’s report—although exports to here have begun to slow as well. Still, executives point to the strong U.S. economy, with both consumer income and spending on the rise. The reasons for the decline in exports to the United States are unclear, says the report, but suggests it’s more a matter of consumer preference—perhaps for smartwatches—than because of any economic pressure. Many Swiss watch brands are shifting their marketing focus away from Asia and toward the United States, such as TAG Heuer’s affiliation with major league soccer, and hoping such efforts will bear fruit quickly.

With a growing economy, Swiss watch executives also believe India could be a bright spot, although their view there is more long-term than for the United States.

For the first time since Deloitte began its annual Swiss watch study in 2012, executives cited counterfeiting among the top five risks the industry is facing. Even more than counterfeiting, gray market watches have become a serious concern, especially in Asia. With the market slowdown in both China and Hong Kong, excessive inventories are being dumped on the market online. More than half the executives surveyed said the gray market is the biggest reputational risk to brands.

Smartwatches are clearly having an impact on the Swiss watch market. The release of the Apple watch last year was a turning point for smartwatches, with sales rising dramatically since then. By the end of 2015, smartwatches had outpaced Swiss watches in terms of units sold 8.1 million smartwatches to 7.9 million Swiss watches), though far behind in value. Last year the value of Swiss watches shipped was approximately U.S. $22.5 billion—nearly double what experts believe the smartwatch market could be in 2017. But Apple at its 2016 Keynote in September claimed to be the second-largest watch brand in the world behind Rolex, in terms of sales. Although the two brands are vastly different, if the figures are correct, it is impressive progression for Apple in such a short time, says the report.

Further, the 2016 edition of the IFA international electronics show in Berlin, Germany brought forth some other smartwatch brands designed by Swiss watch designers, and the Series 2 Apple watch brings some significant updates to the initial model. Although Apple did discontinue its ultra-high end gold models priced well above $10,000, the report pegs the current sweet spot target market for high-end smartwatches will compete with entry luxury Swiss watches priced between $1,000 and $2,000, and younger consumers—which the industry needs to grow—are more likely to buy smartwatches than older consumers. The report advises Swiss brands to offer young buyers entry models to attract them to the brand and later convert them to more high-end mechanical timepieces. 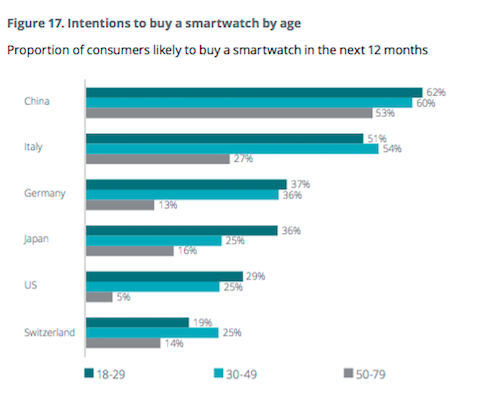 Lastly, digital sales channels continue to grow in importance for Swiss watches. Historically, Swiss watch brands have been reluctant to adopt online sales channels, but that may be set to change. Half of the watch executives surveyed said they plan to put more emphasis online in the next 12 months. Company-branded stores also are getting more consideration, though North America trails Asia and Europe as the preferred location for those.

Next article:
We’re Battening Down The Hatches For Hurricane Matthew