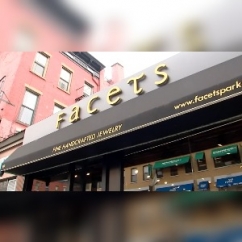 The individuals shattered glass display cases and stole $2 million worth of jewelry successfully.

According to a news report, Facets, located in Park Slope, offers unique pieces and carefully selected collections. However, on Sunday, the store's allure for sparkly items attracted the unwanted attention of three men.

"He reached in his pocket, and I remember thinking this in my head, 'how is he pulling this long thing out, what is this' and it was a hammer he pulls it out and says, 'this is how you use a hammer,' and he just started banging," owner Irina Sulay said about one of the men, as per the report.

The smash-and-grab incident saw the suspects get away with around 100 engagement rings valued at about $2 million.

"It looks like they knew exactly where to go," Sulay stated in the report, adding that the suspects threatened to kill her when she tried to use a phone.

Learn more about how the incident unfolded in the entire news report.

Previous article:
The Stars Sparkled in Rahaminov, Norman Silverman and De Beers at the 2023 Golden Globes

Next article:
Malabar Gold & Diamonds to Open Third US Store in Frisco