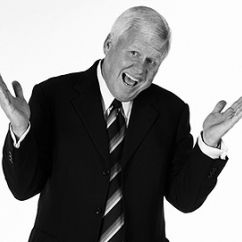 New York, NY—Mark Moeller of Minneapolis/St. Paul, MN-based R.F. Moeller Jeweler, won a Triple Zero Award from the American Gem Society at its annual Circle of Distinction gala dinner on Tuesday. Moeller was honored for his many years of service to the industry—including a term as president of AGS—and his excellence as a jeweler. Rob Bates, senior editor of JCK magazine, also received a Triple Zero Award, for his 20 years of bringing valuable diamond information to the jewelry industry.

AGS’s prestigious Lifetime Achievement Award was presented to the entire Bridge family of Ben Bridge Jewelers, for the firm’s emphasis on education, integrity, and service.

Ruth Batson, executive director of AGS, told the audience that Moeller is always willing to share his knowledge, and has been one of AGS’s most popular speakers. “His classes at Conclave were always packed,” she said.

Moeller, in his acceptance speech, joked that colleagues told him the only reason he’s getting the award is that he’s spending either too much time or too much money at AGS, but then he grew serious and said that the reason his business has grown is because of the people in the jewelry industry.

“When I became president of AGS, I laid down two rules. I said I want no surprises, and I want to be told no lies.” Indeed, he said, what happened to him in this industry was the best thing that could ever happen to anyone: your job becomes your hobby.

Bates, who in addition to his daytime job at JCK also does occasional stand-up comedy, shared some of that talent with the audience.

“Tonight I’ve finally fulfilled one of my long-term goals. I’ve become a big zero,” he joked. He described how he got into the industry, “BS’ed my way into Rapaport [magazine] by saying I grew up in the industry.” Bates’s grandfather was, in fact, in the diamond industry, and his father suggested he close his thank-you letter for the interview with Rapaport with mazal u’bracha—but he admitted to the audience that he didn’t really grow up in it, he just worked hard and fast to learn it as a reporter for Rapaport before moving on to National Jeweler and later JCK.

But he wasn’t joking when he said that AGS’s annual Conclave—where he now is a frequent speaker—is one of his favorite events in the industry.

“After 20 yeas in the industry I’m still learning. It’s been my pleasure to serve the jewelry industry for so long, and I hope I’ll always prove worthy of getting this honor,” he concluded.

The evening’s festivities concluded with the presentation of AGS’s annual Lifetime Achievement Award to the entire Bridge family, the force behind the 100-year-old, five-generation Seattle-based Ben Bridge Jeweler.

Bev Hori, head of education for GIA, introduced the family. Prior to GIA, Hori was in charge of employee education for the firm for many years. She outlined the firm’s five values, which, she said, were not just put on a wall for show but lived every day. They are integrity, community service, education, leadership, and commitment.

Integrity is something Ben Bridge lives and breathes, she said, and it is non-negotiable, and the firm would rather take a loss than damage the company’s integrity. She joked about family members’ commitment to both community and industry service, saying nobody has enough fingers and toes to count all the boards the various family members sit on, including the newest generation.

Both Ed and John Bridge said AGS has been an important part of the store’s business, joking about how the firm began its quest to become AGS certified in 1954, took a hiatus, and finally became and official member in 1976. But today, any one of the 800+ Ben Bridge employees who wants to get ahead in the company must be at least an RJ, he said. (RJ stands for AGS’ Registered Jeweler certification).

In closing the awards ceremony, AGS president David Gardner said, “I feel blessed to be here tonight with these three incredible nominees.”