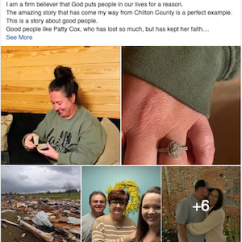 Clanton, AL—When a tornado ripped through Clanton, AL, recently, Tommy and Ann Glasscock, owners of MorLyn’s Fine Jewelry and Gifts, huddled under a stairwell at the store. When the storm passed and the sirens stopped—just 15 seconds later—they emerged unscathed and their store intact, but quickly learned other residents hadn’t been so lucky.

As WVTM-13 reports, one such couple were Trent and Patty Cox. After sheltering together with other family members, the couple were physically unharmed, but their home was literally blown away in the twister and everything they owned was lost. Even Patty’s wedding ring was gone.

Ann Glasscock is known in the community for her giving nature. After hearing what had happened to the couple’s home, she called a mutual friend to see if there was anything she could do for them. As soon as she heard about the lost ring, she snapped into action, offering up a brand-new diamond ring, no strings attached, one tiny part of the road back to healing. 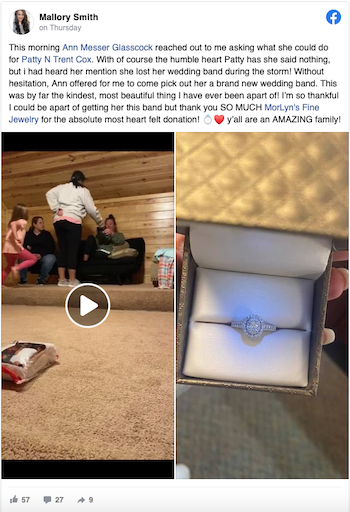 Next article:
Diamond Engagement Ring Average Sale Climbs Up to 20% for Q4 ‘20: Analyst