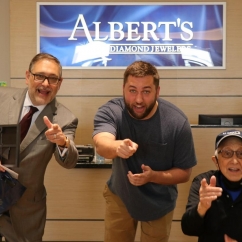 Schererville, IN—Albert’s Diamond Jewelers knows it’s been a tough year for a lot of families, and especially for students and educators alike, many of whom had to grapple with trying to learn and teach virtually. Image: Josh and Fred Halpern celebrate with a student; Joseph Pete, NWITimes.com

The longtime family jeweler recently recognized both students and teachers at a special event at its store, honoring more than 40 students for academic improvement, along with 18 educators, who were presented with an award and a pendant in the shape of an apple.

"For more than 30 years, Albert's Diamond Jewelers has collaborated with local schools to honor students who've improved academically over the last year," the company said in a press release. "At the ceremony, educators and students talked to the store owners, Fred and Josh Halpern, about their school and what the last year has been like with e-learning, and what lessons they've learned."

The students were rewarded with watches from popular affordable brands like Fossil, Michael Kors, and Guess, says this article in NWITimes.

Albert’s Diamond Jewelers is one of the industry’s retail centenarians.  The company was founded by Albert Rubinstein in 1905, in East Chicago, IN, a suburb of Chicago, IL. Although still known as Albert's, the Northwest Indiana store has been owned and operated by the Halpern family since 1960, when Fred Halpern took over and began a tradition of innovative marketing along with providing the community with quality fine jewelry. Today the store sells luxury brands such as David Yurman, Breitling, Shinola, Cartier, IWC, A. Jaffe, Le Vian, and many more, plus an extensive selection of diamonds and diamond jewelry.

Fred Halpern came from a jewelry family—his father owned stores in Chicago—but it took some doing to right the ship at Albert’s. A former employee of his father’s initially had bought the store from Rubinstein, but it soon fell into bankruptcy and Halpern’s father in turn bought what was left, which wasn’t much.

With no inventory and no customers, Fred was sent to the suburbs and put in charge of revitalizing the store. By using memo goods and staying open late every night until after the town’s movie theater let out—almost midnight—he captured business from couples who would wander in after a movie and “the guy would buy his girlfriend a pair of earrings for a buck,” he told the Chicago Post-Tribune years ago.

From there it was on to more innovative ideas. For example, when Fred and his wife, Donna, renewed their Valentine’s Day wedding vows at the store on their 30th anniversary, it sparked an idea: to commemorate the date every year with couples getting married at Albert's. It has become a popular tradition: for the past 22 years, roughly 20 or so couples have wed at the store’s Valentine’s Day “I Do” event each year.

Philanthropy is central to the jeweler’s community involvement. A live annual auction raises money and awareness for multiple sclerosis, with 100% of the proceeds donated to research for the disease—which Donna Halpern has suffered from for most of her life. 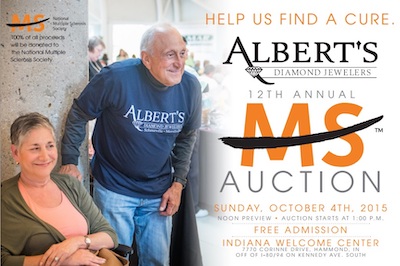 Albert's also supports many other local charities and local chapters of national charities and, of course, has its 30-year tradition of presenting gifts to students who show academic improvement in the school year.

Fred and Donna’s son, next-gen jeweler Joshua Halpern joined the store fulltime after graduation. Since then, the store’s official name was changed to Albert's Diamond Jewelers and, in 2002, moved from East Chicago to Schererville.

Aerial exterior view of Albert's Diamond Jewelers, above, and the store's massive showroom, below. 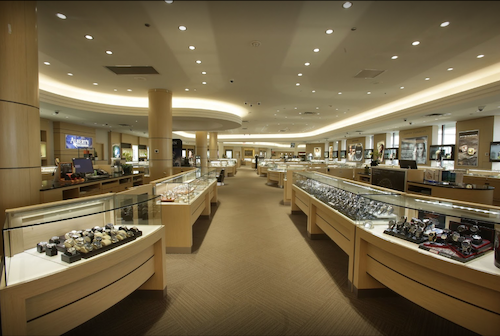