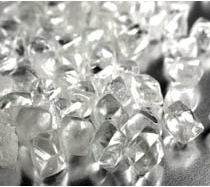 Gaborone, Botswana—De Beers Group on Wednesday announced the value of rough diamond sales (Global Sightholder Sales and Auctions) for the fifth sales cycle of 2021. For the period, rough diamond sales totalled $470 million, up $85 million from the fourth sales cycle that ended last month. Year on year, sales were more than ninefold of the combined cycles 4 and 5 in 2020, when sales of rough were only $56 million.

Owing to the restrictions on the movement of people and products in various jurisdictions around the globe, the Sight event was extended beyond its normal week-long duration. As a result, the provisional rough diamond sales figure quoted for Cycle 5 represents the expected sales value for the period from June 7 to June 22, and remains subject to adjustment based on final completed sales.

Bruce Cleaver, CEO, De Beers Group, said: “With demand for diamond jewelry in the key consumer markets of the US and China continuing to be positive, and midstream capacity in India returning, we have seen strong demand for rough diamonds during the fifth sales cycle. Overall sentiment is increasingly optimistic as we move towards the second half of the year and, while risks as a result of the global pandemic persist, we have been encouraged by the condition of the market.”

The sharp increase in rough diamond sales tracks alongside a solid increase in retail sales of diamond jewelry during March, April, and May, which the Natural Diamond Council says rose 30% over 2019, and more than three times the same period in 2020 at the height of pandemic shutdowns. NDC also said those sales were “heavily supported by Millennials shoppers, both male and female.

Increased demand means prices of diamonds are going up as well, as both De Beers and Russian miner Alrosa have depleted their stocks of unsold goods left from 2020 along with new production, while the pandemic caused bottlenecks in cutting centers.