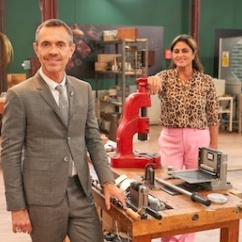 London, UK—Millions of people love to binge-watch TV talent competition shows, whether it’s performing arts like American Idol and The Voice, cooking shows like Top Chef or BBC’s The Great British Bake Off, building and design competitions like HGTV’s Rock The Block, or metalworking, a la History Channel’s Forged in Fire, a competition for makers of knives. Even Ellen DeGeneris had a show dedicated to furniture building. But so far, surprisingly, there hasn't been one dedicated to jewelry-making. (Image: British jewelry designers Shaun Leane and Solange Azagury-Partridge will be the judges of tthe new jewelry competition show.)

Now there is and jewelers finally are going to have an opportunity to, er, shine. In a new series called All That Glitters: Britain’s Next Jewelry Star, the BBC has tapped eight jewelry designers to compete live on television to create a series of 12 pieces in a six-episode series--and possibly get the notice of Queen Elizabeth II in the process.

According to a report in The New York Times, the new show will pit the jewelers, ranging in age from 23-56, against each other to complete two projects in each of six one-hour shows. Each segment, the designers must create one mass-market jewelry item, and one specialized custom item for a real customer. The judges are Solange Azagury-Partridge and Shaune Leane, two globally renowned British jewelry designers. In addition to evaluating all the pieces, at the end of each episode, they will name one “jeweler of the week”—and, of course, send one jeweler home.

Azagury-Partridge is a former creative director for Boucheron, and Leane is best known for a two-decade collaboration with the late Alexander McQueen, for whom he created runway pieces that often end up at major auction houses.

Azagury-Partridge told the Times the show is a way to honor and highlight jewelry. “I don’t like it when jewelry is referred to as an accessory,” she told the Times. “Personally I think it’s the main attraction on any person, really.” Azagury-Partridge and Leane will judge the contestants’ mass market projects, but the custom clients get to judge the bespoke project and take the winning piece home.

The show is being filmed at the Birmingham School of Jewelry, in the city that’s the center of the British jewelry manufacturing industry. The first episode aired in Britain on April 13.

Unfortunately, the show is only available in the UK at present, but there’s more information here. And, since other competitive shows like The Great British Bake Off have made their way stateside, there's hope this will too.