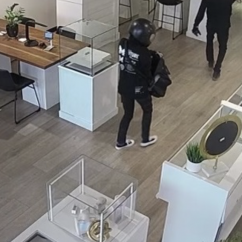 Huntington Beach, CA--California police arrested two persons in connection with a shooting of a jewelry store employee during an armed robbery in North Phoenix, Arizona, on July 12.

According to a news report, the incident occurred on July 12 around 6 p.m near Anthem Way. Authorities responded to the scene of the incident and found the gunshot victim, who was rushed to the hospital and treated for possible life-threatening injuries.

The report states that on July 16, Huntington Beach police arrested Helen Simmons, 18, and Mathew Jones, 22 after a brief chase. The two have been booked with various charges. James is held on a million-dollar bond whereas Simmons is on a half-million-dollar bond, according to reports.

An eyewitness dining at a nearby restaurant patio saw the suspects enter Andrew Z Jewelry in the Anthem Marketplace, a strip mall. According to one news report, a witness saw two armed persons with motorcycle helmets dressed in black. The witness recalled hearing five to six gunshots, then seeing the suspects run to the back of the strip mall and fled.

Another source told the publication that a male employee was shot several times. Maricopa County Sheriff's Office reportedly said the victim was in stable condition after surgery.

Next article:
Colonial Heights Armed Robbery Suspect Allegedly Walks Out With $40,000 Worth of Jewelry