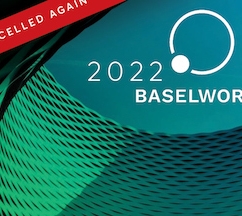 Basel, Switzerland—The beleaguered Baselworld Fair had hoped to put its troubles to rest and forge ahead with a newly revamped edition of the historic fair next year, but that reboot has been put on hold again. Last week MCH, organizers of the fair, announced the cancellation of the 2022 Baselworld event, originally planned for March 30 – April 4. No new date has been announced.

The fair was already in hot water when the global COVID-19 pandemic hit in 2020. Then a series of decisions by show management—including a date change to early January—angered key exhibitors like Rolex and Patek Philippe, who exited the fair in response. Following that debacle, MCH’s announcement that it would not fully refund exhibitors’ booth fees further angered remaining exhibitors.

Ultimately, Baselworld management canceled the 2021 event, saying it would use the time to explore new platforms and formats.

It held a pop-up experiment during Geneva Watch Days and was slated to debut a new concept in 2022 but now that has been postponed as well.

“It’s particularly difficult to launch a new concept for a new target segment due to the renewed aggravation of the COVID-19 situation and the associated uncertainty among customers,” said show organizers in a statement. They also said they need more time for discussions with both manufacturers and retailers and to refine their new concept.

In addition to canceling the 2022 event, Baselworld managing director Michel Loris-Melikoff also announced he will step down from his post. No replacement has been named.

Next article:
Do You Know A Good Young Jeweler? JA Seeks Nominations for ‘20 Under 40’ in Jewelry Retail