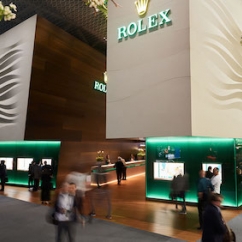 Basel, Switzerland—Rolex, Patek Philippe, Chanel, Chopard, and Tudor are leaving the Baselworld fair to create a new watch trade show in concert with the Fondation de la Haute Horlogerie, organizers of Watches & Wonders (née SIHH) in Geneva. The new event, which reportedly will merge the exhibitors of both groups, will be held at Palexpo in Geneva in early April 2021, roughly the same time Watches & Wonders would have been held. At press time it didn’t have dates or a new name—and thus far it doesn’t seem like jewelry is in the exhibit mix.

The brands’ departure from Basel follows a series of decisions made by MCH Group, the fair’s intractable organizers, to hold the 2021 edition in late January instead of April and to not refund the deposits of exhibitors that can’t attend at that time.

In a statement, Baselworld expressed “great surprise and equally great regret” at the brands’ decision to bolt—but also took a swipe at the departing companies, suggesting that plans to bolt to Geneva were already in the works and that objections about the date change and financial issues were simply a smokescreen.

“The companies now "migrating"—including Rolex—spoke out in favour of a postponement to January 2021. They are also represented on the Exhibitors' Committee, where the future vision of Baselworld has been discussed on several occasions and has met with a positive response, as was also evidenced by countless individual discussions,” said the statement.”

Baselworld had long enjoyed a place as one of the 800-lb. gorillas among global jewelry and watch exhibitions. Over the years, the fair’s management pushed the show upmarket, pricing out all but the biggest brands, and grew increasingly tone-deaf to objections—from both exhibitors and visitors—over its high prices and dictatorial ways. Following a greatly diminished fair in 2018 and the exit of the Swatch Group at that time, a major management shakeup of MCH was supposed to be a turning point in the fair’s high-handed treatment of its customers. But this year’s actions proved that while the faces in the executive office might have changed, the attitude didn’t.

A joint press statement issued by the five brands reads in part, “The [new show’s] aim is to offer partner brands the best possible professional platform, applying a shared vision to successfully meet future challenges in the watchmaking industry. It will also give crucial prominence to the sector’s expertise and innovations, both in Switzerland and internationally.

Other brands may also be added, according to terms that have not yet been defined. This new event will be geared predominantly toward retailers, the press, and VIP customers.”

Jean-Frédéric Dufour, CEO of Rolex SA and a board member of sister brand Tudor, said, “We have taken part in Baselworld since 1939. Unfortunately, given the way the event has evolved and the recent decisions made by MCH Group, and in spite of the great attachment we had to this watch show, we have decided to withdraw. Following discussions initiated by Rolex, it seemed only natural to create a new event with partners that share our vision and our endless, unwavering support for the Swiss watchmaking sector. This will allow us to present our new watches in line with our needs and expectations, to join forces and better defend the interests of the industry.”

His remarks were echoed by the heads of the other brands. Thierry Stern, president of Patek Philiippe, said in part, “The decision to leave Baselworld was not an easy one to take for me, being the fourth generation of the Stern family to participate in this traditional yearly event. But life evolves constantly, things change and people change as well, whether it is at the level of those responsible for the watch fair organization, the brands, or the clients. We constantly have to adapt ourselves, question what we do, since what was right yesterday may not necessarily be valid today.

“Today Patek Philippe is not in line with Baselworld’s vision anymore. There have been too many discussions and unsolved problems; trust is no longer present.

“We need to answer the legitimate needs of our retailers, the clients, and the press from around the world. That is why, in agreement with other participating brands, we have decided to create, all together, a unique event in Geneva.”

Other key brands also have bailed from Baselworld. Breitling announced its departure after the 2019 fair, and Gucci, Bulgari, two Seiko brands, Citizen, and Bulova also pulled out before the January dates were announced. At press time, the LVMH Watch Division (including Hublot, TAG Heuer, and Zenith brands) still remained, but this article in Singaporean watch journal SJX speculates they’ll likely decamp to Geneva as well.

“It is known that the French luxury group’s watch division has long coordinated its Baselworld activities with the four brands that have just left for Geneva. As a result, the three brands that make up its watch division will likely exhibit in Geneva during the same period,” writes Jiaxian Su, the site’s editor. “And that’s the end.”

The fair’s statement clearly indicates it’s possible: “In the next few weeks, the MCH Group will be making a decision on the continuation of Baselworld and on investments in its further development, which is geared to the long term,” said its April 14 statement.

But will MCH Group really close the lights on the 103-year-old fair, or on its investment of “substantial sums in the further development of Baselworld and in the establishment of additional digital platforms,” as described in its statement?

That’s a lot of equity to throw into the wind. Some possible outcomes: 1) the show continues as a much smaller regional attraction, drawing visitors by car or train for a day or two; 2) it tries to regroup as a one-stop pan-European or global jewelry fair and attempts to win back the many small interesting designers that decamped for Inhorgenta and other shows after being priced out of Basel; or 3) it throws everything into digital and works to become the industry’s pre-eminent global exhibition platform: an 800-pound virtual gorilla, as it were.

Whatever happens remains to be seen, but in the short term it’s fair to say that without Rolex and Patek—arguably the fair’s biggest and most central brands—Basel’s relevance to key players in the global jewelry and watch industry is gone.

Previous article:
How Long Will The Bear Market Last?