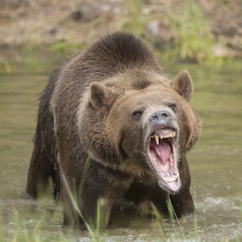 Merrick, NY—As the coronavirus pandemic spread around the world last month, global stock and futures markets tanked in response and there’s still no consensus on how low they’ll go or how long it will be before they turn around. Experts agree that a V-shaped recession—a sharp downturn followed quickly by an equally sharp recovery—is the best-case scenario, but they don’t all agree that it’s how things will play out. The other thing experts all agree on is that market volatility and wild swings are likely to continue until the pandemic is under control.

But it is possible to glean some insight from prior downturns to predict how this one might play out. A new report from investment bank Goldman Sachs examined bear markets from 1800 to present. Data revealed that bear markets triggered by adverse events such as the coronavirus pandemic tend to be both shorter in duration and quicker to recover (i.e., V-shape) than those triggered by either structural issues (like the 2008 financial crash) or natural cyclical downturns.

That’s the good news. Statista Infographics compiled this chart (below) based on the Goldman Sachs report, comparing the average length of time in months of the three kinds of bear markets and recoveries. As you can see, event-driven downturns were much shorter than those produced by structural problems or ordinary economic cycles. It’s especially encouraging for luxury retailers because their customers are far more likely to be impacted by market losses both real and perceived than non-luxury retailers’ customers.

But don’t break out the champagne just yet: the data shows that even though a bear market triggered by force majeure is typically short-lived in market terms, in real terms it’s not immediate. If the current situation follows historic patterns, it will be at least two years before the markets recover to pre-pandemic levels. Indeed, in his annual letter to shareholders released April 6, JPMorgan Chase CEO Jamie Dimon predicts “a bad recession” due to coronavirus, and as big banks' quarterly reports (including JPMC's) came out this week, economists increasingly began talking about a depression, not just a recession.

Statista’s author also cautions that things are still too unpredictable to know if this bear market will follow the same pattern as prior event-driven ones. 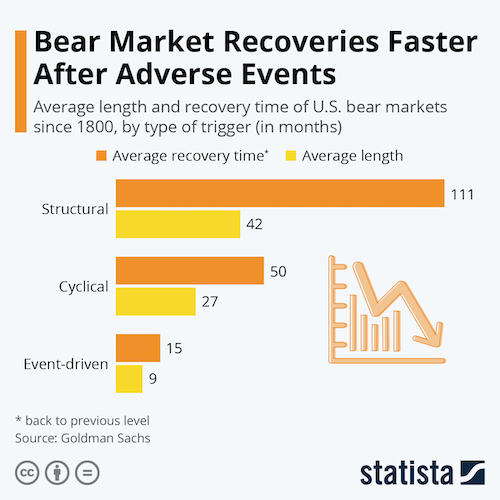 The only thing that matters is getting the virus under control.

In YouGov’s March 19-22 study of affluent Americans’ response to the current situation, only slightly more than one third (35%) of respondents saw a stabilized stock market as an indicator of a return to normal. But that figure dropped more, to only 28% of respondents in the latest study, conducted April 3-6. The April study also showed that despite affluent consumers’ concerns about the health of local businesses (87% are “extremely” concerned), having the government reopen business still won’t be enough to convince them everything is back to normal. 73% want to see hard data that shows a decline in spread/new cases of COVID-19, 70% say having a proven effective treatment will bring things back to normal, and 61% said a vaccine could bring things back to normal.

Luxury executives polled in a Luxury Daily article expect the current situation to go on for months. 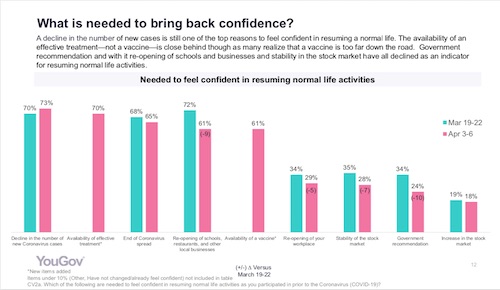 YouGov's findings show that the only thing that will bring back affluent consumers' confidence is getting the virus under control. Green bars show findings from the March survey; pink bars show findings from the April study. The two questions that show only a pink bar--the availability of effective treatment or vaccine as a measure of confidence--were only asked in the April survey, not both.

In that regard, affluent consumers are no different than their non-affluent counterparts. An article in Monday’s New York Times shows that despite some images to the contrary Americans in general are avoiding risk of their own accord—governmental shutdown or not—and will feel confident about returning to normal only after testing or vaccine reassures them of minimal risk of contracting the virus. Another Times article detailing year-on-year shifts in consumer spending as of April 1, shows spending on jewelry and watches down 70% from a year ago. The chart indicates figures from Kay Jewelers, Shinola, and 32 other outlets and brands. 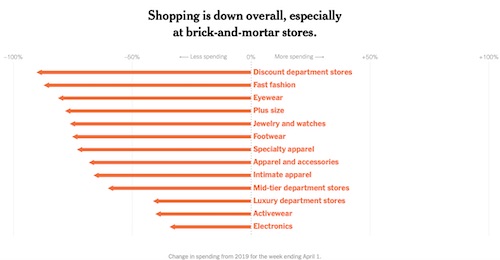 This chart from the New York Times shows the categories of retail spending that have declined since the onset of the coronavirus pandemic. A report Wednesday morning showed retail sales down 8.7%, surpassing economists' expectations of an 8% decline.

A spot of good news, however, from YouGov’s findings: affluent consumers did learn some good lessons from the Great Recession. Although 89% of affluent consumers believe the U.S. economy is either already in or about to be in a recession, 88% feel confident about their own financial situation and their ability to endure a downturn. Chandler Mount, vice president of business development at YouGov’s Affluent Perspective, says affluent consumers have actively deleveraged and boosted savings in the years since the Great Recession, making them far more confident of their ability to withstand this crisis, at least financially. 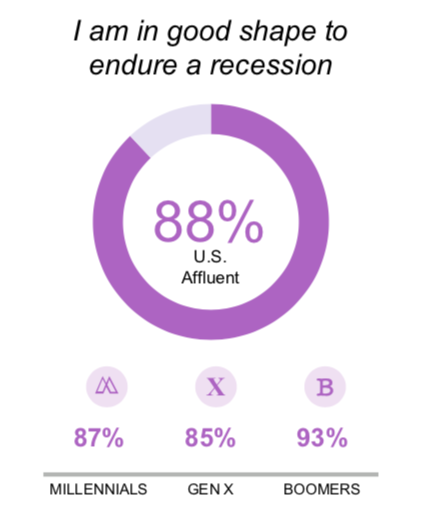