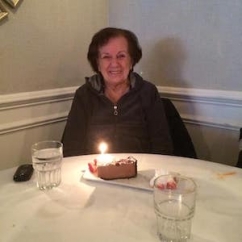 Rosemarie Cillo (left), mother of Staten Island jeweler Gerald Amerosi Jr., died April 9 of complications from COVID-19. She was 87. Amerosi is the owner of Gerald Peters, a luxury jewelry store he runs with his two sons, Gerald III and Peter. Cillo is survived by Amerosi and his family; she was predeceased by her husband and another sister. Flowers in her memory may be sent to Egers Funeral Home in Staten Island, NY.

Diamond dealer Emanuel “Manny” Gordon died on April 7 of COVID-19 at age 79. The namesake founder of Manny Gordon Trading, he also was brother-in-law to famed diamond dealer William Goldberg. The two became close friends and, eventually, business partners. Gordon was the younger brother of Goldberg’s wife, Lili. In addition to Lili, Gordon is survived by his wife, Stephanie; four children, one grandchild, another sister and one brother.

Iraj Yonatan Namdar, patriarch of the H.J. Namdar family, died last week at age 87. He is survived by his wife, Lena; three sons, Benny, Joel, and Effy; and a daughter, Rachel Nouriely. Memorial donations may be made to the Namdar Foundation.

Next article:
How Long Will The Bear Market Last?