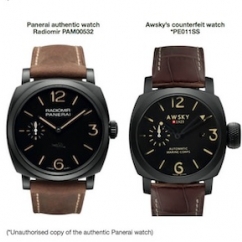 Geneva, Switzerland--Intellectual property is one of the hot topics of the 21st century, which has seen the emergence of a knowledge economy alongside the unprecedented dissemination of information via digital channels. The ongoing patent wars between Apple, Samsung and Huawei, as well as other tech giants, are only a foretaste of what lies ahead. (EuropaStar Image: In April 2020, a Chinese court issued a favourable opinion to Panerai in a lawsuit against a Chinese company, Awsky, for infringement of its intellectual property rights.)

In watchmaking too, the issue of intellectual property is gaining in importance. It is often played out behind the scenes in an industry that prides itself on discretion. However, horological intellectual property was recently brought into the limelight with Panerai’s legal action] against Chinese company Awsky. Looking further back, the naming dispute between Swatch and Ice-Watch led to a saga with many twists and turns between 2008 and 2014, which was finally settled out of court (Click here for details.) Apple has lost IP battles against the Swiss Federal Railways (SBB) and Swatch (see below).

On an object that measures just a few centimetres across – a watch – the shapes and lines can sometimes end up looking disturbingly similar... even when it’s not a case of outright copying, or criminal counterfeiting. Given the financial and strategic stakes, many disputes arise. In a branch that is fond of discretion, these differences are generally resolved behind the scenes. We interviewed an intellectual property specialist working in the watch industry, Emmanuel de la Brosse, founder of the IP Board consulting firm.

Click here to continue reading in Europa Star. (This excerpt is brought to you through Centurion's editorial partnership with Europa Star.)